GM Varuzhan Akobian claimed the trophy at the 17th Annual Chicago Open, that took place on 23-26th May, after beating Armenian GM Tigran Petrosian in Armageddon tiebreaks. Tigran Petrosian and Hikaru Nakamura were heading into the last 7th round with 5 points each, half a point ahead of the bulk of players. Being content with sharing the first place prize pot, they decided to quickly draw their game, giving a chance to others to catch up with them on the top. The only one who managed to win for the first place tie among many fighting draws on the top boards was Akobian with white pieces against GM Alonso Zapata.

Money prizes were split equally among the players with shared points, but it was still necessary to declare the official champion. Akobian had the highest tiebreak points and was privileged to wait while Petrosian and Nakamura squared off in the first Armageddon game. Petrosian was successful and advanced to meet Akobian in the ultimate match. The 2008 Doeberl Cup winner firmly took white pieces and seven minutes on the clock against challenger’s 5 minutes and draw odds. Akobian finally won a position with small advantage and after avoiding all stalemate traps, thus being honored as 2008 Chicago champion. 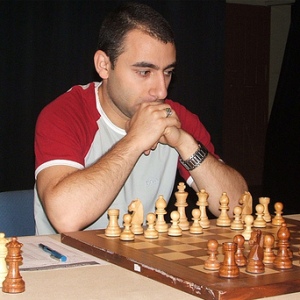 GM Alex Yermolinsky, GM Dmitry Gurevich, GMJulio Becerra, GM Nikola Mitkov and GM-Elect Josh Friedel finished half a point behind the lead pack. Josh Friedel, who has just earned his final GM-norm last week at the US Championship, also broke the 2500 elo barrier and will be officially recognized as Grandmaster on the next FIDE meeting. Young Canadian Zhe Quan is also near the 2400 border, which is the final condition for his IM title.