derby matches in the men section

Russia and Armenia created a real show on table 1. After a quick draw between GM Asrian and GM Jakovenko, all
attention was directed to the WCC Mexico 2007 flashback
- Aronian against Svidler. In an equal game, Svidler got half a point away with black. It was another WCC participant who brought a decisive point for Russia. GM Morozevich won against GM Akopian. GM Alekseev secured the win for Russia with a draw on board 3.

participant who decided the outcome. GM Morozevich won his game against GM Akopian, and Russia stays on the lead 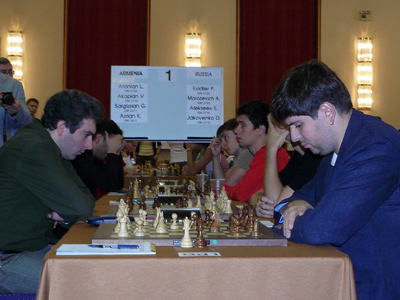 Exciting match, in which GM Morozevich brought the full match points for Russia

Ukraine got a kick start against Spain, with NH tournament winner Sergei Karjakin winning his game against Alexei Shirov. However, the Spanish team did not give up and equalized the score with GM Illescas scoring scoring an important victory against GM Moiseenko. Vallejo held Volotkin to a draw and as it happened in many matches today, the last board was decisive for the final outcome. It was the longest game of the day, but GM Areshchenko and GM Khamrakulov split the point. Thus, Ukraine – Spain was one of the few equal matches of the day. 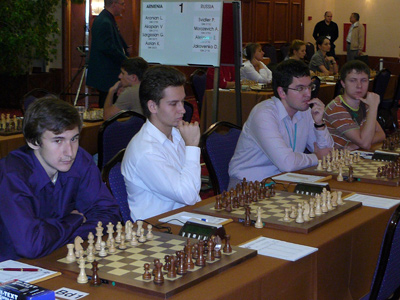 Ukraine up and ready for challenge before the game

The Dream Team of Bulgaria faced the higher rated team of Azerbaijan. The ex world champion Veselin Topalov had a

constant slight advantage against the Essent 2007 winner, Shakhriyar Mamedyarov. However, the Azeri player found the

precise moves and could hold the draw. On board 2, the magic of Linex, Ivan Cheparinov, drew with Radjabov in the battle of the youngsters. The same result

was produced on the last board between Delchev and Guseinov. The match was decided on board 3, where Kiril Georgiev 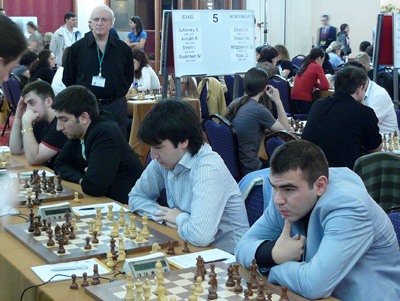 The hosts Greece enganged in an interesting battle with Hungary. Balogh – Banikas and Berkes – Mastrovasilis quickly reached draws, leaving the final outcome to the top

boards. GM Almasi and GM Kotronias could not find the way to a decisive score after close to four hours of play. 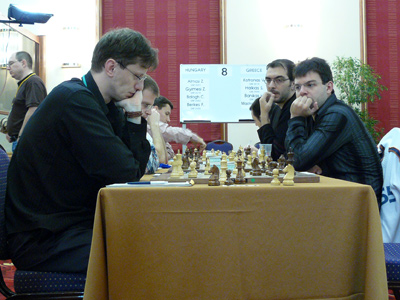 Hungary vs. Greece on table 8

competition and for sure will aim at the first places.

Norway crushes Wales and is aiming at the top

The team of Luxembourg almost brought the big surprise of day 2. Pierre Gengler (ELO 2195) won the game on board 4 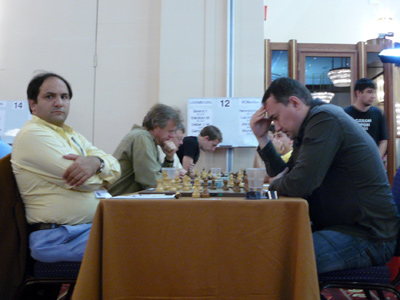 Luxembourg had a strong day against Romania

More on the ETCC