GM Alexander Areshchenko confirmed his entry to the 7th Parsvnath International Open Chess Tournament in the last moment, becoming the top seeded player of the competition with ELO 2673. Having a rating over a 150 points more than the 10th seeded at the competition, Areshchenko was the clear favorite at the start of the tournament. However, he was shocked in the very beggining – after a comfortable win with black in round 1, Areshchenko lost to Anilkumar O T (2207) with white in the second round. 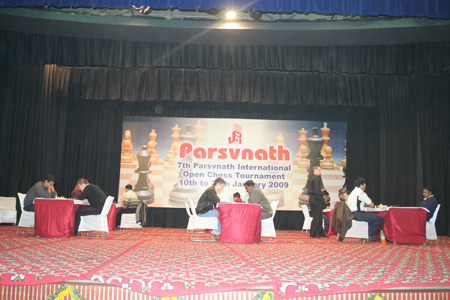 The top tables at the
7th Parsvnath International Open Chess

“I have never beaten a GM before, so it’s a momentous occasion for me,” said Shah for local media. “All that I did was believed in my game. I was a pawn up in the opening itself and by the middlegame I had two-pawn advantage. All that I needed to do was play safe and I managed to win.”

Asked if he will participate in the U-10 World Championships in Greece next year Shah replied, “I don’t know. If I get sponsors I would definitely go.”

Abhijeet Gupta to play in Corus 2009

GM Abhijeet Gupta was last year’s winner of the Parsvnath International Open Chess Tournament. This year he is not present at the competition, as he will be playing in the 2009 Corus C chess tournament. GM Gupta is third seeded after GM Wesley So and GM David Howell.