It was the final many were waiting for. Vishy Anand against Magnus Carlsen. The reigning World Champion against the player many consider to be the next World Champion. But Anand used his experience and skill to show why he is the World’s number one. He gave his young opponent no chances and defended his title of World Rapid Champion without trouble. The match for third place between Alexander Morozevich and Judit Polgar might not have been as technically correct as the games of Anand but it was highly entertaining. After four exciting games Morozevich won 2,5-1,5 to take third place.

Magnus, what happened? This is what the fans of the Norwegian might have asked after the first game – or the match – of the final of the 13. GrenkeLeasing Rapid Chess World Championship. Carlsen boldly – foolishly? – went for the Dragon again and dared Anand to find an improvement of their first game of the preliminary. Anand duly obliged and when he came up with a new move Magnus seemed to be surprised. At least, he spent a long time to find a way to justify his strategy. Finally, he came up with an exchange sacrifice but Anand decided to continue to go for Carlsen’s king. Playing with queen against rook might have been possible to win quicker, the outcome was never in doubt. 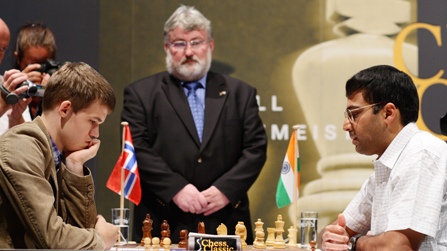 Final match Carlsen-Anand at its start

In the match for third place, Judit Polgar at first appeared to continue her losing streak against Morozevich. Playing the Black side of the Benoni she failed to create dynamic counterplay and suffered from her queenside weaknesses. However, although Morozevich won the a-pawn, he failed to win the game because he suddenly found it difficult to penetrate Black’ position in the endgame.

Carlsen fans could not be happy about the second game of the final either. Carlsen steered the game into Kramnik’s favorite opening – the Catalan. Maybe Carlsen was hoping that Anand would not want to show his preparations against Kramnik, but Black easily equalized and soon after had already seized the initiative, which he used to win a pawn. As White had no counterplay to talk of, Anand won without problems and the match started to look as a one-sided affair.

Third round presented how Anand approaches each game as a professional. Needing only a draw to win the match and to defend his title, World Champion took no risks. After 1.e4 c5 2.Nf3 d6 he declined the invitation to a sharp Sicilian and preferred the calmer waters of 3.Bb5+. And he continued with this safety-first policy until the very end. He gradually increased the pressure against Carlsen’s position until the Norwegian was forced to concede a pawn. With extra pawn and a better position, Anand made what Leko would call “a professional move”: He offered a draw which Carlsen had to accept to make Anand the new and old World Champion in Rapid Chess. With this victory Anand won the Chess Classic for the ninth time in a row and for the eleventh time altogether.

This made the fourth game of the match a mere formality and the players indeed agreed to a draw after eleven moves giving Anand a clear 3-1 win.

While Anand showed technique and professionalism, Judit Polgar showed courage and creativity. With Black she again went for the Benoni against Morozevich and in a double-edged situation suddenly came up with Bxh3, sacrificing a bishop for unclear compensation.

She continued to play creatively and was rewarded with the slightly better endgame. However, in the end this was not enough and for the third time Judit Polgar and Morozevich shared the point after an interesting game.

All this excitement took its toll on Judit in the fourth game. As she admitted in the press conference she “did not have the same energy as in the first game”. Still, the game was interesting but this time Morozevich managed to convert the advantage he had after the opening into a full point to come third.

Mainz 19th August 2007 The World Rapid Kind and the defending Champion Viswanathan Anand broke his own record to lift the World Rapid Title for the 10th time at the Grenke Leasing World Rapid Championship which concluded here at Mainz.

The First three games against the Chess960 World Champion Levon Aronian were drawn and it was only in the crucial 4th game that Anand could beat Aronian and stamp his supremacy in the Rapid format.

Aronian and Anand played the last game on the Catalan lines and Aronian was quick to keep the game on his side. Anand playing with black, slowly improved from his worse position and took complete control of the game. In the endgame Aronian was in time trouble, but gave a tough fight. Alas he could not stop Anand from winning the game.

Anand spoke to Chessdom’s correspondent Vijay Kumar, “I am very happy to lift the title for a record 10th time. This was a very tiring championship as I had to play 14 games with Aronian, but I am happy to win. In My last game Aronian was better in the opening, but as the game developed and my Knights became more powerful blocking all his pieces. There was no other way left for him.”

Videos of Aronian, Anand, and Kasimdzhanov