It was an exciting end of an entertaining and interesting event. In the final of the 2. FiNet Chess 960 Rapid World Championship Alexandra Kosteniuk and Kateryna Lahno played four hard fought, entertaining games. Sometimes Kosteniuk proved to be lucky, sometimes Lahno. But in all four games of the match, Kosteniuk set the pace in the end she deservedly won became World Champion.

The first game already set the tone of the match. Kosteniuk with White, proceeded aggressively and in the middlegame her passed d-pawn and her prospects on the kingside seemed to give her good chances – though she probably was not too happy about her exposed king.

But in the tactical complications that ensued after Kosteniuk tried to break through on the kingside White had to give a couple of pawns. When the queens went off the board Kosteniuk put all her faith into the strong passed pawn on the d-file. As both players were desperately short of time by now Lahno failed to find the proper defense – which was there – and lost.

However, fortune smiled upon her in the second game. Kosteniuk with Black again gained the initiative but after winning a pawn with a tactical combination suddenly found herself confronted with a lot of counterplay by White. While still keen on converting her extra pawn into a win she took too many chances and in the end was mated by Lahno.

Unperturbed, Kosteniuk continued to play well in game three, which opened with 1.e4 e5 2.f4 d5 and thus led to a bizarre “King’s Gambit”. In fact, Kosteniuk played in a good King’s Gambit style to gain a lead in development and started to open files against the enemy king. However, though her position looked overwhelming she failed to deliver the decisive blow and Lahno could escape into a draw. Thus, after three games the score was 1.5:1.5 and the fourth game was to decide the match.

Maybe it was the pressure of the match, maybe it was the disappointment of the chances she had missed in the previous games, but in the crucial fourth game Kosteniuk seemed to be determined. Perhaps a bit too determined. The opening being barely over she decided to go for complications which could have easily backfired had Lahno found the right moves. But maybe the pressure of the situation also affected Lahno’s nerves. At any rate, in a complicated tactical position she blundered a piece and after a couple of irrelevant moves finally decided to resign which made Alexandra Kosteniuk the new World Champion in Chess960. 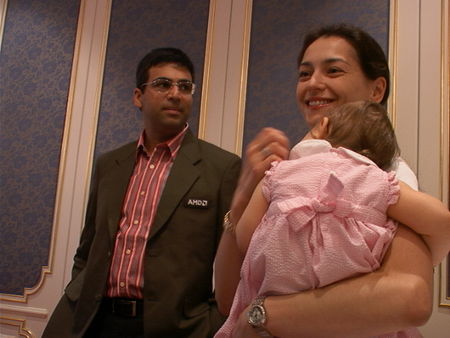 However, despite winning the title, Kosteniuk did not get carried away. In the press conference after the game she said, that she “was not too happy about the chess. I had a number of promising positions and made too little of them.” That might be true, but that she still won just shows her class.

The match for third place between Natalia Zhukova and Viktorija Cmilyte came to a quicker end. Both players had decided to take part in the FiNet Open, in which Natalia Zhukova with 3.5 points from 5 games did pretty okay. However, against Cmilyte she again had troubles with the clock and clearly lost 1:3.

But in the press conference after the match Zhukova did not seem to be too shaken by her disastrous tournament and was keen to play the second half of the FiNet Open tomorrow: “Of course, I want to qualify for the next World Championship.”

She seems to know what a good tournament is.