Victories of Anand and Shirov give The World one point lead

Azerbaijan took early lead against The World, after Mamedyarov defeated Shirov on board 3 in the first round. All other games finished draw, thus Azerbaijan is leading 2,5:1,5 the match, which is part of the President’s Cup. Stay tuned for interview with Vishy Anand and many details from the scene, on Chessdom.com!

Shirov recovers in round 2 and gives a quick win against Guseinov. It was immediately followed by a victory by Anand against Gashimov, and The World is a point ahead. Radjabov – Kramnik and Mamedyarov – Karjakin finished peacefully their round 2 game. Scroll down for full updates and stay tuned for interview with Anand.

The tournament began today at the «ONS» Theater, a place that has become the Mecca of chess in Azerbaijan in the last years. Two years ago there was held a women’s tournament «Baku-2007» with the participation of Antoaneta Stefanova, Ekaterina Lahno, Monica Socko and other chess players, and many other events have been held there as well.

In his welcoming remarks, the President of the National Federation Elman Rustamov said that “the importance of the meeting can not be overestimated, and it will become a new landmark in the history of chess in Azerbaijan”. Participants were also greeted by the Minister of Youth and Sports Azad Rahimov, who was happy that another major chess tournaments is taking place in Baku.

After the welcoming remarks of the local officials, the scene was given to the President of the World Chess Federation, Kirsan Ilymzhinov. “Heydar Aliyev made an enormous contribution to the world of chess, and his advice has often helped me in the work. And symbolically, that just before the match the President Ilham Aliyev signed a decree on the state program for the development of chess. In many of his speeches he expressed the hope that the chess crown will return to Azerbaijan. And looking at your young grandmasters, I think it will be so” stated the FIDE President. 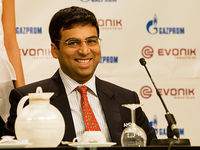 As Chessdom.com reported earlier, Anand was given the Chess Oscar at the beginning of the opening ceremony. This is the 6th Chess Oscar for Anand, who becomes the non-Russian player with the most Oscars.

The Oscar was presented to Anand by Mark Glukhovsky from the «64 – Chess Review». He stated that Anand won the award with a large margin over Veselin Topalov, who took the second spot (Danailov’s take on that here)

The best actors and actresses of Hollywood receive an award each year, at the Oscars. The highest goal scorer at the football world cup, receives the Golden shoe. The best Cricket team receives the ICC Mace each year. In chess, the equivalent award is the Chess Oscar. This is an International award instituted in the year 1967 by Jorge Puig,and the winner was chosen by accredited journalists following the game from across the world. It is traditionally given to the Grandmaster who, according to the chess aficionados, was the best and most entertaining player that year.

The first winner was Bent Larsen in 1967 and the award ceremony was held in Madrid. In 1988 Puig died and the award was not given until 1995. They were reinstituted in the year 1995, by the popular Russian chess magazine – ’64′.

Rauf Mammedov gave a quick interview for Azerisport immediately after round 1. “I was confident that we will win”, he stated, “We could even win with bigger score.” Shirov commented that Mamedyrov has very strong opening preparation. “Mamedyarov was better prepared and the score says it,” stated Shirov after round 1.

Radjabov, “I had a nice position against Anand, but I could not convert it.”

Shirov managed to recover in round 2 and commented, “I got quite an unfamiliar position in the beginning, but later I managed to find the correct continuation and won”.

Guseinov was confused and commented, “Changing the order of the draw did not go according to my plan. Initially we were told that double rounds will be played, that meant playing Karjakin with black. But then it turned out I have to play Shirov.”

Anand had some good words about his opponent and praised the defence by Gashimov. “However, at one point he made a blunder and I managed to lead the game to a victory,” Anand stated. Stay tuned for more details from the scene!