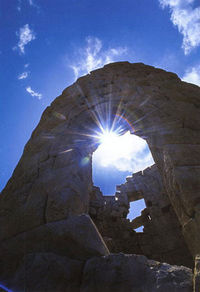 The Ikaros Chess Festival 2009 will take place 11-19 July 2009, at Agios Kirykos, Ikaria island, Greece. It will be a 9 rounds accelerated Swiss tournament wit 90 minutes plus 30 seconds per move (from move 1) for the completion of the game for each player.

The competition has a total prize fund of 3600 eur, in case of sharing the same place the money prizes are divided according to the Hort system among the players with the same final score. (With Hort system every player gets first 50% of the prizes according to his rank. The other 50% are distributed uniformly within a scoregroup over the players).

Conditions to GMs, IMs,WGMs, and WIMs

There are very interesting special conditions for titled players, GMs, IMs, WGMs, and WIMs. The organizing committee will cover Round Trip (Piraeus-Ikaria-Piraeus) ferry tickets, accommodation costs (without the meal expenses), and entry fee.

Additionally GMs and WGMs will receive € 2 (two euros) for every rating point above 2400 (based on FIDE rating list of July 2009).

For the rest of the participants the organisation committee offers a special
discount package that includes Round Trip (Piraeus-Ikaria-Piraeus) ferry
tickets, accommodation costs for the period 11-19/7 (without the meal expenses),
and entry fee at the price of 300 Euros. Special additional discounts apply for
juniors, families (at least 3 members) and club teams (at least 4 members) and
for those who pay until 30th of June.