The 26th Linares chess tournament will be officially opened this afternoon with a ceremony in the Spanish province of Jaen. All the participants, Viswanathan Anand, Magnus Carlsen, Vassily Ivanchuk, Levon Aronian, Teimour Radjabov, Wang Yue, Alexander Grischuk and Lenier Dominguez, will be present. The official part of the opening will take place in Teatro Cervantes, where the pairings will be decided as well (photo preview of the event here).

Chessdom.com will bring you the latest news from Linares. Starting tomorrow, we will feature daily commented games. On the first playing day, February 20, the games of Carlsen and Anand will be commented by GM Iotov, GM Bojkov, GM Dimitrov, and IM Perunovic. 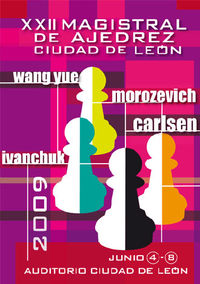 The 22nd Magistral de Leon, the other top chess event in Spain besides Linares, will take place July 4-7 in Spain. It will be in the usual format of rapid mini matches, each game with rapid time control.

The participants for 2009 are Magnus Carlsen, Vassily Ivanchuk, Alexander Morozevich, and Wang Yue.

The organizers will provide live games commentary by GM Miguel Illescas and GM Michael Rahal, as well as a simul by GM Morozevich.