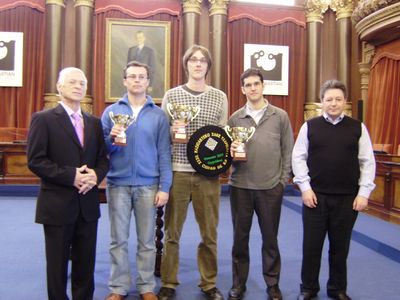 The happy winners of the 32nd San Sebastian tournament

The last round of the event was played on Sunday. On the first board, Artur Kogan drew to Vinay Bhat in 19 moves after a
French defence. Pablo Lafuente and Matej Sebenik also drew on the second
board which finished with a perpetual-check in 29 moves.

The young spanish IM Mikel Huerga, needed to win against GM Marc Narciso
to got his second GM norm, but lost his game after receiving a hard
attack in his kingside. The now spanish-citizen Roberto Cifuentes, won
in a very long game againts the top seeded Aleksandar Delchev, in a rook-and-pawns
ending.

The spanish U12 champion, Jaime Santos Latasa was the revelation of the
tournament with a 2500+ performance after beating 2 IMs and drawing with
3 GMs. Jaime Santos had impressed San Sebastian since he played for the
first time in 2006, and drew his game after rejecting a draw offer from
his opponent GM Ivan Salgado (ESP) on move 16.

At the moment there are 160 games available from the first 8 rounds on the official website http://www.fgajedrez.org all the games of
the tournament will be available later.

Stay tuned for a detailed photo report on Chessdom.com!