Many spectators were left high and dry yesterday, after the official live feed from Mtel Maters blocked. It never got restored, rather it was substituted by an message by the organizers that “Due to technical issues the round will not be broadcasted live.”

No further details were given. Everyone was hoping that they could see at least the end of the games, but that never happened. The glass cell itself was not the best friend of the journalists that tried to copy some moves and the cameras were not pointed in the direction of the boards.

Chessdom.com has found the roots of the story. A combination of a very unreliable chess software and the sense of humor of the mayor of Sofia destroyed the live transmission.

As the tradition goes, the first move at Mtel Masters is done by a high official. This year the designated person was Boiko Borisov, current mayor of Sofia. Mr. Borisov, an ex military general, is famous for his humor. Last year at the closing ceremony he said, “Topalov did not win, so that he tricks Kramnik to come to Sofia”.

However, things did not go as smoothly as planned. The heavy traffic in the city did not allow the high official to arrive on time and he entered the glass cell 10 minutes later. Topalov and Carlsen were instructed to wait for the guest, who also attracted a multitude of journalists.

Borisov entered smiling, greeted everyone and directly went to the board. He started in a typical sense of humor, “When we were young we played a lot of chess,” and moved 1. b3, after which he continued, “but we had a special rule that white is allowed to move twice at the start,” after which Borisov moved immediately the white bishop on b2. 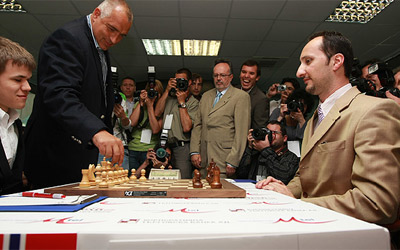 This move was not accepted by the computer software and it immediatelly blocked all transmission. Carlsen’s face was not very happy after the moves and they had to be put in initial position and 1. d4 was played. This did not help the software restore and that is how the thousands of chess fans were left only with the Chessdom live updates and very little other coverage. “I made an ambush on Topalov!” said Boiko Borisov, not realizing the very unreliable software chess has for the digital boards. All transmission was blocked for the whole day.

To make the show complete, Boiko Borisov turned to the journalists and told them another story. “I have invented a new type of chess. A chess where I do not lose. I play with friends in the sauna, after half an hour they get tired and I always win.”

The technical staff of Mtel Masters proved useless and could not repair the live feed. Games are supposed to continue today on the official website, live commentary will be probided on Chessdom.com by GM Bauer and GM Dimitrov.