He came. He played. He conquered. That was what seventeen-year-old international master Robert Hess from New York did over Spring Break at the 2009 SPICE Spring Grandmaster Invitational. This strong six-player double-round-robin (the highest rated round robin tournament in the United States so far in 2009) tournament took place March 16-22 in the Southwest Collection building at Texas Tech University.

For his spectacular play, Robert impressively earned his second grandmaster norm with three rounds to spare and clinched at least a tie for first with two rounds to go. He clinched clear first the day before the tournament ended. I expect Robert to earn his final grandmaster norm and title before the end of this year. His future is very bright.

The other young phenom in this tournament was fourteen-year-old Ray Robson of Florida. He also showed incredible promise by scoring four remarkable victories, including three against grandmasters. After a rough start with just half point in the first four games, Ray stormed back by scoring four and a half points in his final six games to finish with an even score! “I am very impressed by the performance of this young man and I believe that the sky is the limit for him in chess”, said Grandmaster Susan Polgar, the chief organizer of this tournament. 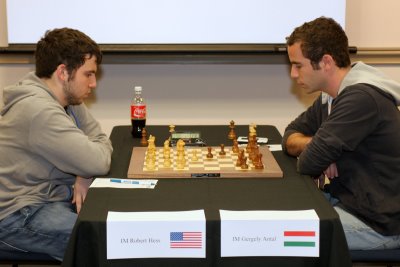 More than 150 pictures from the 2009 SPICE Spring Invitational have been uploaded. You can view them here.

Here are some interesting statistics about the SPICE Spring Invitational:

* Mongolian GM Dashzegve had the biggest fighting spirit with 484 total moves in ten games, followed by Hess with 381 moves, Robson with 349 moves, Kacheishvili 339 moves, Antal with 310 moves and Gareev with 306 moves.

* 1.e4 was played seventeen times while 1.d4 was played eleven times. Only two games began with other moves (one with 1.c4 and one with 1.Nf3).

The Susan Polgar Institute for Chess Excellence (SPICE) and Texas Tech University will once again host the 2009 SPICE Cup, the highest rated International round robin tournament in U.S. history, from September 19-29, 2009. It will be at least a FIDE category 16 or higher. A strong B group is also planned. GMs P. Harikrishna, Alex Onischuk, Varuzhan Akobian, and Leonid Kritz tied for first at the 2008 SPICE Cup, which was a category 15 event.

In less than two short years since former Women’s World Champion Susan Polgar joined the staff at Texas Tech University, the city of Lubbock and SPICE have become one of the major centers of chess (in both education and competition) in America.

Through the Susan Polgar Foundation, nearly $1 million in chess scholarships have been awarded to young chess players in both the U.S. and in other countries in the past few years. Many more major events are planned in the near future and there will be a lot more chess scholarships available to give young talented players an opportunity for higher education in a major U.S. university. The future of chess is bright!