Kamsky is still concerned with the light in the playing hall 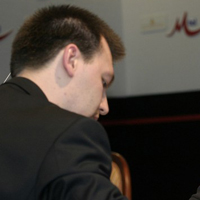 Believe it or not, the match Kamsky – Topalov has been on the verge of another toilet scandal. The details about the events on the inspection by Emil Sutovsky and Kamsky’s team on Sunday were revealed in the newspaper Standart. There has been initial disagreement on the toilet placement. The base of the argument is not known, but the solution is 1. to put cameras in front of the doors of each toilet and 2. remove the chemical toilets from behind the scene.

Standart newspaper confirms the news revealed by Chessdom.com yesterday, that Kamsky is not happy with the light in the playing hall. He wants the outside windows to be totally covered with black cloth, while all the light sources in the playing hall to be directed towards the chess table.

The third problem has been the distance from the audience, but this quickly has been solved and the people will stand a few more meters behind.

Stay tuned for more updates with Chessdom.com and do not miss the live commentary of game 1!