Long time tournament leader WGM Irene Kharisma Sukandar from Indonesia took a short draw against IM Nguyen Van Huy from Vietnam in the final round of the Brunei Invitational IM Tournament 1 to score an unbeaten 7 points from 9 games in a gritty and determined performance to keep a share of first place, and in doing so made her first ever International Master title norm.

All the drama was however in a very tense encounter between top seeded IM Oliver Barbosa from the Philippines and young FIDE Master Ramnath Bhuvanesh from India as the winner would join WGM Sukandar in joint first place and for FM Ramnath that meant he would also get an International Master title norm.

Playing aggressively with the black pieces in a Sicilian Najdorf with opposite side castling, FM Ramnath paced the hall nervously in between making his moves at a rapid tempo while IM Barbosa sat calmly defending until allowing a thematic Sicilian exchange sacrifice after which he got into serious time trouble and that made his task in a complicated game very difficult. 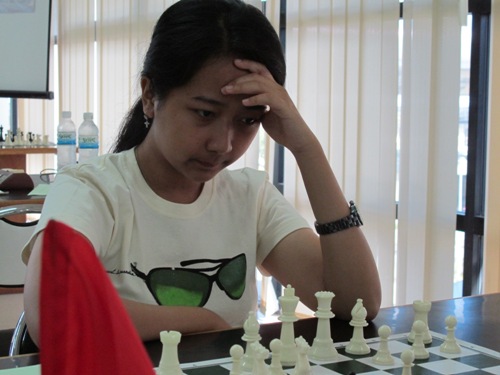 In a resulting queens with pawns ending where both sides played badly, FM Ramnath finally won and with that, IM Duong The Ahn from Vietnam with 6.5 points was third, while IM Barbosa dropped down to join IM Nguyen to 6 points and share fourth and fifth places.

Local hope FIDE Master Yee Soon Wai was sixth, scoring 4.5 points in a good performance that would have been better if the breaks had gone his way including a desperately unlucky loss to WGM Sukandar in the third round which then forced him to take too many risks in his later games.

On seventh with three and a half points was Nodir Vakhidov from Uzbekistan, followed by top Brunei woman Siti Nur Fatimah together with her off form brother Md Aliuddin Hj Azahari, both with two points to show from many promising positions, and last was veteran Hj Md Baharuddin Hj Sulaiman who had half a point after struggling with both rustiness and off the board work commitments.

The Brunei Invitational IM Tournaments are two back to back ten player round robins being played from 25 July to 4 August 2010 at the Brunei Chess Centre in Bandar Seri Begawan, and organised by the Brunei Chess Federation to exposure their young players to international competition.