News from the playing hall in Sofia and doping control 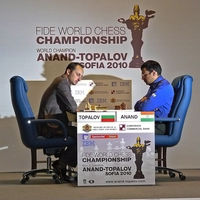 Audience in the playing hall of the match Anand – Topalov saw a normal start of round 3 with a full house of journalists and many interested chess fans ready for a battle. The game entered into a well known Slav variation, where white plays with slight advantage and black can draw with precise moves (replay game here). Exactly this led to theoretical discussion not on the board, but rather on the rules of the World Chess Championship.

Before the start of the match, Topalov said that he will play the match according to the Sofia rules, despite the fact they are not official part of the regulations. Anand answered him during the press conference saying, “I have come to Sofia not to play Sofia rules, but World Chess Championship rules.”

After the bishops were exchanged at move 33, the game entered a dead draw position. Topalov and Anand kept on playing. After the time control on move 41, Topalov went to get the arbiter and according to the audience in the playing hall seemingly requested a draw. The arbiter went to the board, but Anand did not look at him and executed his next move, thus continuing the game. The arbiter stayed until the threefold repetition.

Observers from the hall confirm there was no handshake at the end of the game.

Chessdom.com journalists and the players themselves confirmed there was no handshake after the game.

Update 2: The players at the press conference said they simply forgot to shake hands at the end of the game.