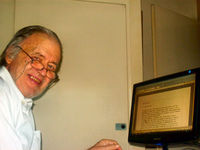 Bent Larsen was in a class and a model for an entire generation of chess masters around the world. While he was on top, he won tournaments in front of the world elite, including seven world champions, and he was in his time the only western challenger against Soviet chess domination. His importance to chess in Denmark as a chess player and inspiration is unsurpassed, and his achievements and games will forever be carved into Danish and international chess history.

This year Bent Larsen turned 75 and on the occasion of his 75th birthday the Danish Chess Union published a special issue of Chess magazine The magazine can be downloaded here.

The year 2010 was chosen in Danish chess circles as the year of Bent Larsen. Lectures on Larsen’s career were organized and congratulations were sent to Argentina. Several tournaments have been held to honor Larsen, the last one played in Denmark current best player, GM Peter Heine Nielsen, a display matches over three days against the Russian star player Peter Svidler. One of the days they played b3 as first move, also known as Larsen-opening (scroll down for more information on the opening).

Larsen is considered to be the strongest chess player ever born in Denmark, and strongest in Scandinavia at least until the emergence of Magnus Carlsen. Since the early 1970s, he has lived for part of the year in Las Palmas and in Buenos Aires, with his Argentinian-born wife.

Larsen, who was born in Thisted in Denmark, represented Denmark twice in the World Junior Championship, in 1951 at Birmingham (placing fifth), and 1953 at Copenhagen (placing eighth). He never graduated in Civil Engineering, but decided to become a chess professional. He became an International Master at the age of 19 in 1954, from his bronze-medal performance on board one at the Amsterdam Olympiad. He won his first of six Danish Championships in 1954, and repeated in 1955, 1956, 1959, 1963, and 1964.

Larsen became an International Grandmaster in 1956 with his gold-medal performance on board one at the Moscow Olympiad. He tied for 1st-2nd places at Hastings 1956-57 on 6.5/9 with Svetozar Gligorić. At Dallas 1957, he scored 7.5/14 for a shared 3rd-4th place; the winners were Gligorić and Samuel Reshevsky.

At the 1957 Wageningen Zonal, he tied for 3rd-4th places, along with Jan Hein Donner, with 12.5/17; there were only three qualifying berths, so the two players had to dispute a playoff match. Larsen won by 3-1 over Donner at The Hague 1958 to qualify for his first Interzonal, at Portorož 1958. Larsen could score only 8.5/20 for 16th place, and was not close to qualifying. But he scored his first major individual international success by winning Mar del Plata 1958 with 12/15, ahead of William Lombardy, Erich Eliskases, Oscar Panno, and Herman Pilnik.

Around this time Larsen diversified his style, switching over to risky and unusual openings in some of his games, to try to throw his opponents off balance; this led to the recovery of his form and further development of his chess. He finished 2nd at the 1963 Halle Zonal with 13/19, behind winner Lajos Portisch, to advance to the Interzonal the next year. At Belgrade 1964, he shared 5th-6th places with 10/17 (Boris Spassky won). He tied for 5th-7th places at Beverwijk 1964 on 9.5/15; Keres and Nei won. Larsen’s unusual openings were on full display at the 1964 Amsterdam Interzonal, where he shared the 1st-4th places on 17/23 with Boris Spassky, Mikhail Tal, and Vasily Smyslov, advancing as a Candidate.

In the 1965 Candidates’ matches, he first defeated Borislav Ivkov at Bled by 5.5-2.5, but lost in the semi-final, also at Bled by 4.5-5.5 to former world champion Mikhail Tal. He won a playoff match for alternates, an eventual third-place Candidates’ position, against Efim Geller by 5-4 at Copenhagen 1966. In 1967 he won the Sousse Interzonal after Fischer withdrew, then won his first-round match against Lajos Portisch by 5.5-4.5 at Porec 1968. In Malmö, however, he lost the semi-final by 2.5-5.5 to Boris Spassky, who went on to win the title.

In 1970 he shared 2nd in the Palma de Mallorca Interzonal, on 15/23, behind Bobby Fischer. He reached his top rank in the Elo rating system at the start of 1971, equal third in the world (with Korchnoi, behind Fischer and Spassky) with a rating of 2660. He then defeated Wolfgang Uhlmann by 5.5-3.5 at Las Palmas 1971. But then he lost the semi-final 0-6 at Denver to Fischer, who also went on to win the title.

Larsen later claimed in a Kasparov.com interview (1998) that his one-sided loss to Fischer was due in part to his condition during the match: “The organizers chose the wrong time for this match. I was languid with the heat and Fischer was better prepared for such exceptional circumstances… I saw chess pieces through a mist and, thus, my level of playing was not good.”

Starting in the mid-1960s, Larsen enjoyed a very successful run in major tournaments around the world, and he and Fischer became the two strongest players outside the Soviet Union. Larsen played in a lot of strong events, at least as many as any other top player, and repeatedly finished ahead of the top Soviet players. He won at Le Havre 1966 with 9/11, ahead of Lev Polugaevsky. At Santa Monica 1966, he placed third with 10/18, behind Spassky and Fischer. He won at Havana 1967 with a powerful 15/19, ahead of a strong group which included Mark Taimanov, Smyslov, Polugaevsky, Gligoric, and Miroslav Filip. He shared 2nd-3rd places at Dundee 1967 with 5.5/8, behind Gligoric. At Beverwijk 1967, he was 4th with 8.5/15 (Spassky won). At Monte Carlo 1967, he shared 3rd-4th with 6/9, behind Fischer and Efim Geller. He shared 1st-2nd at Winnipeg 1967 with 6/9, along with Klaus Darga, ahead of Spassky and Keres. He won at Palma de Mallorca 1967 with 13/17, ahead of Smyslov, Mikhail Botvinnik, Portisch, Gligoric, and Borislav Ivkov. He was awarded the first Chess Oscar in 1967.

He represented Denmark six times in Olympiad play, always on first board, and compiled an aggregate score of 75/109 (+61 =28 -20), for 68.8 per cent, according to olimpbase.org. He always played a very high number of games, almost all of the rounds, and won three board medals, one gold and two bronzes.

In 1988 he lost a game to Deep Thought in the Software Toolworks Championship, becoming the first Grandmaster and the player with the highest Elo rating (by then 2560) to be defeated by a computer in tournament play.

Larsen has continued to play occasionally in tournaments to the present day. In 1999 he finished 7th of 10 in the Danish Championship, but in the 2000 event he was forced to withdraw when he became seriously ill with an edema, requiring brain surgery. He has played in only a few tournaments in Buenos Aires since then. He was 4th in the 2002 Najdorf Memorial knock-out. In the September 2010 FIDE list, he has an Elo rating of 2415.

It is named after the Danish Grandmaster Bent Larsen. Larsen was inspired by the example of the great Latvian-Danish player and theoretician Aron Nimzowitsch (1886-1935), who often played 1.Nf3 followed by 2.b3, which is sometimes called the Nimzowitsch-Larsen Attack. It is classified under the A01 code in the Encyclopaedia of Chess Openings.

The flank opening move 1.b3 prepares to fianchetto the queen’s bishop where it will help control the central squares in hypermodern fashion and put useful pressure on Black’s kingside. Often, the b2 bishop is a source of recurring irritation for Black, and it should not be treated lightly.

Although Bent Larsen was initially very successful with this opening, it suffered a setback in the 1970 USSR vs. Rest of the World match in Belgrade, in which Larsen played this opening against reigning World Champion Boris Spassky; and lost in 17 moves. (It should be pointed out that of the 42 games between Spassky and Larsen, Spassky won overall with 19 wins, 6 losses, and 17 draws.) Larsen was also decisively defeated when playing this opening against Balinas at Manila 1975.

Main lines in Larsen’s opening are:

* 1…e5, the Modern Variation, is the most common response, making a grab for the centre and limiting the scope of the White Bishop. Play on this line typically continues 2.Bb2 Nc6, attacking and defending the e5 pawn, respectively, and then 3.e3 d5 4.Bb5 Bd6 5.f4 is the main line.

* 1…d5, the Classical Variation, is the second most common, also making a grab for the centre and preserving the option to fianchetto the King’s Bishop to oppose the White one. Here, white uses 2.Nf3 to hopefully transpose to a reversed Nimzo-Indian Defence or another Indian defence. This can also be reached by the move order 1.Nf3 d5 2.b3.

* 1…Nf6, the Indian Variation, developing a piece and not committing to a particular pawn formation just yet. 2.Bb2 and if 2…g6 then 3.e4, taking advantage of the pinned knight (e.g., not 3…Nxe4 4.Bxh8, winning a rook at the price of a pawn).

* 1…c5, the English Variation, retaining the options of …d5, or …d6 followed by …e5. 2.c4 transposing to an English Opening or 2.e4 tranposing to a Sicilian Defence.