Schmitt stated that “Mainz” has become a brand name in the chess world. “Chess players, professionals and amateurs alike, do not talk about the Chess Classic, they talk about “Mainz”. “Our tournament has always been an event in which world champions, professionals and amateurs meet and play. Everybody can play in the open tournaments and win a prize, or play against the best chess players of the world in a simultaneous exhibition.

However, due to the financial crisis it has become more difficult to find sponsors for our event this year, and that is the reason why we had to go “back to the roots”. In 1994 we started off the first Chess Classic in Frankfurt with a simul and an open tournament and we chose that “old” format for this years’ event again. Believe me, it is not really important that the tournament is shorter than before, the intensity of the event is decisive and we, the Chess Tigers, are passionate as always.

We are very glad to receive the support of the Lord Mayor of Mainz, Mr. Jens Beutel and our sponsors. You can hardly find a better place in the world for a chess event than the air-conditioned Rheingoldhalle with the adjacent Hilton Hotel, just steps away from the beautiful city center. Mainz would be a great spot to organize a Chess Olympiad or a world championship. But it is not enough to have a great location, you need money as well”. 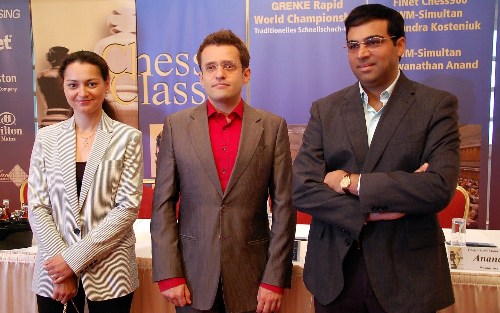 For Jens Beutel, the patron of the event, the Chess Classic is one of the highlights of the year, not only because he is a passionate chess player. “The event is excellent city promotion and it seems to me that finally, after ten years, the people in Mainz understand that the Chess Classic is an important event for the city. That is why I think that some of the local sponsors we lost will come back next year. I would be more than happy to welcome the chess players of the world next year for the 11th edition”. With a smile he added: “11 is a number that suits Mainz perfectly”. The number “11″ plays a key role in Carnival and Mainz is one of the three cities prominent in the Rhenish Carnival tradition.

The main sponsor of the Grenke Open is GRENKELEASING AG, one of the biggest IT financing specialists which is independent of banks and not tied to any manufacturer. Christian Bossert, representative of the sponsor said that GRENKELEASING AG not only supports the best Bundesliga chess team from Baden-Baden, but also support chess projects for children and is glad to be involved in one of the best chess tournaments in the world, the Chess Classic.

The players also made some statements. World champ Vishy Anand stated that he was glad to be in Mainz again. He won the Chess Classic no less than 11(!) times. On his (real) Twitter account “Vishy64theking” he wrote: “no play, just chill”. When asked for his favorites for the Open, Anand answered: “It will be difficult to say who is going to win the Grenke Open, there are many strong players competing. Obviously Levon (Aronian) and Sascha (Grishuk) are hot candidates for first place, but I would not put my money on them.”

Aronian agreed: “It will be a tough tournament and I think there is no clear favorite. I would not be surprised, if some of the top players will not even be in the top 20 after 11 rounds. Myself included!” He smirked: “Hans-Walter Schmitt is always trying to find challenges for the players: sometimes I have to play a match, now I have to play the Open, and he even convinced me to play a Chess960 simul!” 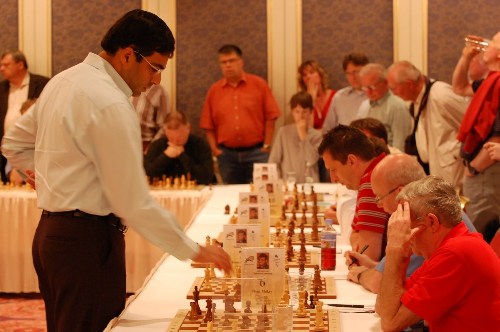 Anand in his simul against Chess Tiger Hans Mokry, who celebrated his 76th birthday

“Come together” in Mainz

Women chess world champion Alexandra Kosteniuk was upset when she found out that no Chess960 events would be played in Mainz this year. “I am happy that I can play the Chess960 simul and I have to say that I love Chess960! I like to be creative and I really enjoy the Chess960 events in Mainz. For me, Mainz has always been a good starting point: in 2008 I won the Chess960 world championship and after “Mainz” I won the chess world championship and I scored other good results. I hope that the 2010 edition will become a new starting point for a successful chess year again. There are some important events coming up, like the Chess Olympiad in Khanty-Mansiysk and the women’s world championship in December in Turkey. But Mainz is not only important for me: I know that a lot of professionals just love to come here to meet other players in a relaxed atmosphere. That is what makes “Mainz” special.”

World Champ Anand played a simul on 40 boards. As a rule, the player who gives the simul plays with the white pieces, but one exception was made today: the oldest member of the Chess Tigers, Hans Mokry celebrated his 76th birthday and was allowed to play with white. Anand agreed with a smile, but won the game anyway. After 4 hours and 23 minutes, Anand finished his simul and his final score was 36-4: +34-2=4. He lost two games: one against Henrik Karlzen from Sweden and one against Bernd Grill from Germany. 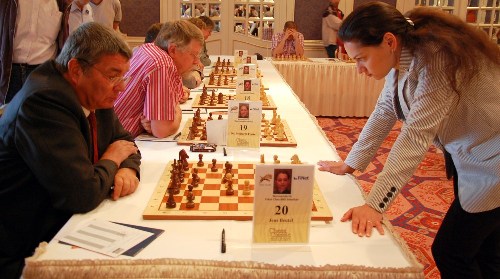 Kosteniuk in her simul against Lord Mayor Jens Beutel