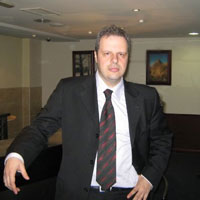 A lot of interest around European Chess Union administrative matters can be noticed in the last months. How and why ECU becomes so popular now? I co-operated, as organizer, with ECU since 1998. At that time ECU was looking more like a Committee than as a Federation. Without any visible budget, without stable offices, and no any interest in the few ECU events.

A lot of things happened the past 10 years. ECU established offices in Berlin, increased step by step the annual budget, created more continental events and grew the ECU member states to 54. So what is today ECU? Sometimes we look the tree and we lose the forest. Let’s see what is the level of the annual official ECU competitions, the main missions of any International Sports’ Federation.

* European Club Cup in 2008, Halkidiki, Greece men and women reached the level of 100 teams and holds the record of the most viewed European chess event on the internet!

* European Youth Championship reached the level of 1000 participants! in 2008 in Herceg Novi, Montenegro.

* European Rapid Championship reached the level of 700 participants! this year in Warsaw Poland.

Today ECU finally has a profile, a base, a budget and a considerable portfolio of annual Events. And this is one of the main reasons that many chess personalities want to work and offer their services to the Organization. We have already three candidates for the President’s Office and it seems that we will have more proposals. In fact this is good for ECU, Chess, and Democracy because the competition will bring more work and development.

What must be done in the future? Of course ECU needs more professionalism, more manpower, additional income, innovative actions and for sure more focus in the top chess. I would add that any candidate for ECU administration should be aware of chess, but also of European history and cultural heritage, understand the International business environment, be independent of any national or governmental policy, and have a clear commitment to the social responsibility.

I heard some thoughts that ECU has to take a similar status and profile as UEFA or even FIBA Europe. This is an interesting proposal but it does not depend on ECU, but mostly on FIDE. FIBA was divided on 2001 in 5 zones. Currently, the Zones are more powerful than Central FIBA. FIBA members elect President in a single 4-year term by circulation between the 5 Zones. The majority of FIBA Central Board members (17 out of 20 members) are elected in Continental (zones) elections and not in FIBA Congress.

I don’t think that we have to change the current status formation of FIDE or ECU. We rather need to improve further the functionality and efficiency of our Organizations. A strong and leading FIDE needs a flexible and innovative ECU which should act as driving force. We need a united ECU, from Gibraltar to the Urals. Productive Europe is the expected and the desirable result.