The FIDE Honorary President left this world on May 3rd

Florencio Campomanes, former President of FIDE and current Honorary President, has passed away at age 83.

Campomanes was elected to that post in 1982, and held it until 1995. During his presidency FIDE family increased by 50 nations. In 1995 he was appointed as FIDE Honorary President, and was often present at significant international competitions such as zonal and continental championships, chess olympiads and world chess championships

The latest events with Campomanes

Opening of the 2008 Chess Olympiad (photo) 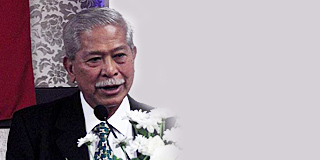 Florencio Campomanes (February 22, 1927 – May 3, 2010) is a Filipino political scientist, chess player and chess organizer. He was born in Manila and earned his B.A. in Political Science from the University of the Philippines in 1948. Then, he studied at Brown University (Providence, Rhode Island), where he earned his M.A. in 1951. He undertook doctoral studies at Georgetown University, Washington, D.C., from 1949-54.

He was a National Master strength player during his peak years, and was Philippine national champion on two occasions (1956, 1960). He represented his country at five Chess Olympiads: Moscow 1956, Munich 1958, Leipzig 1960, Varna 1962, and Havana 1966. He met some distinguished opposition as a result, losing games against Pal Benko and Ludek Pachman at Moscow 1956, Oscar Panno at Munich 1958, Mikhail Tal and Miguel Najdorf at Leipzig 1960, and Lev Polugaevsky at Havana 1966.

He became involved in FIDE as a national delegate, and worked his way into prominence in Asian chess organization. Campomanes often boasted that he was close to the former Philippine President Ferdinand Marcos. Campomanes helped to organize the World Championship match at Baguio, Philippines, in 1978, between Anatoly Karpov and Viktor Korchnoi.

He is best remembered as the President of the international chess organization FIDE. He was elected to that post in 1982, and held it until 1995, through several controversies, most notably the abandonment of the 1984-85 World Championship between Anatoly Karpov and Garry Kasparov without result, after 48 games, and the break-away from FIDE of the Professional Chess Association in 1993. The cancellation threw the international chess calendar into disarray for the next several years, since a series of matches had to be held to resolve the matter, and these affected other qualifying events.

On the positive side, the membership of FIDE grew significantly, by about 50 member nations, during his tenure as FIDE president. Campomanes was succeeded as FIDE President in 1995 by Kirsan Ilyumzhinov. He was appointed as FIDE Honorary President, and was often present at significant international competitions such as zonal and continental championships, chess olympiads and world chess championships

Campomanes was the only Filipino to ever hold the highest position at FIDE, the world chess governing body based in Lausanne, Switzerland.

In early February 2007, Florencio Campomanes suffered injuries from a car accident, at which time he was in intensive care.

On May 3, 2010 Campomanes died in the Philippines.

Florencio Campomanes, the man responsible for putting the Philippines in the chess world map, is dead.

Campomanes, who became the first Filipino — and Asian for that matter – to become the head of the International Chess Federation (FIDE), died of prostate cancer at around 1:30 p.m. Monday at Iggy’s Inn in Baguio City. He was 83.

Known for turning things around in Philippine chess, Campomanes or known as Pocamps to his dear friends, shook the world by securing the FIDE presidency as an underdog in 1982 in Lucerne, Switzerland.

“He moved on peacefully, and with quiet gentleness all around him,” said Des Bautista, who built the Iggy’s Inn with wife, Auring. “He was a giant in Philippine sports and his passing created a void that will be hard to fill in.”

Bautista and Campomanes were bosom buddies dating back the 1960s.

“I lost a man who was more than a brother to me,” said Bautista. “And, if I may add, I also lost a poker mate, whose passion for and skills in the card game are rivaled only by his love for and deft-laden moves in chess.”

In his early years, Campomanes was a national chess master, who represented the country in major international events.

He was the RP chess squad skipper. He also worked as a professor of Political Science at the University of the Philippines-Diliman.

He also became a journalist, writing columns for the old Manila Times and the defunct Daily Express while also served as media reporter, covering the Cuba World Chess Championship during the 1960s, with Carlos Benitez, Renato Naranja and Rodolfo Tan Cardoso as his teammates.

During his pre-FIDE days, he produced the country and Asia’s first grandmaster – Eugene Torre – in 1973 while also responsible for staging the 1978 World Chess Championship between Anatoly Karpov and Victor Korchnoi.

Campomanes would also soon bring to the country the world’s top grandmasters from Europe and the United States, among them include Tigran Petrosyan, Boris Spassky, Garry Kasparov and Bobby Fischer.

His election as president in 1982 opened the doors for non-chess nations to join FIDE-sanctioned events. He courted countries from Asia to Africa, the Arab world to South America through his battlecry, “One World Through Chess.”

In 2009, the University of Baguio awarded him a doctorate in humanities, honoris causa.
At the time of his death, Campomanes was the president emeritus of FIDE.