The event sponsored by Rural Electrification Corporation Ltd and hosted by K R Mangalam World School GK-II had 44 players in action which include 12 Grandmasters and 20 International Masters fighting out for the coveted National Champion title and the lone spot for the world championship from Asian Zone 3.7.

In the opening ceremony the organizers announced an increase of 1.35 lakh in the prize money as Asian Chess Federation sanctioned $3000 as prize money due to India’s separate zone status. In the recently concluded FIDE Congress, World Chess Federation awarded the separate zone Asian Zone 3.7 status to India. Now the winner will carry a cash prize of Rs. 1.25 lakh instead of earlier one lakh. 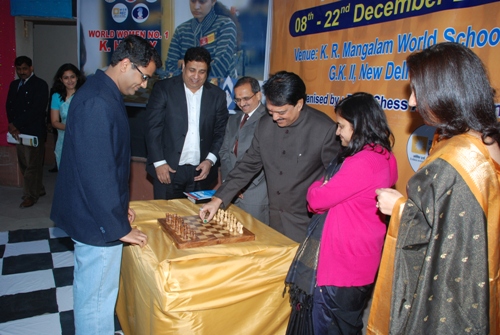 First round of the championship in now underway at the time of going to press and top seed Gopal taking on India’s new International Master Vishnu Prasanna while Parimarjan Negi pitted against International Master Rahul Sangma of Delhi. Grandmaster Arun Prasad of PSPB is not paired for the first round as he arriving late for the event due to his brother’s marriage and starts his second round match tomorrow with zero point in his kitty.

B. Adhiban is the winner, report by Chief Arbiter R. Anantharam

B. Adhiban, world under 16 champion in 2008, added one more feather to his illustrious cap by winning the Indian Premier Chess Championship 2009, organised by Venus Chess Academy and Mumbai Chess Association. The tournament format was changed from thirteen player round robin recently, in order to expose the young Indian talent with experienced seniors and also to boost the chances of several norm aspirants. Participation of 10 GMs and 20 IMs among the forty two players speaks volumes of the strength of the national championship. Of course, the tournament was without Viswanathan Anand, the world champion, Sasikiran, Harikrishna and Ganguly (second to Anand), who are all directly inducted into the Indian team with rating above 2650 and Koneru Humpy, women world no. 2, but still boasted a strong line up.

G.N. Gopal, the grandmaster from Kerala representing Petroleum Sports Promotion Board, was the top seed, followed by Abhijeet Gupta. But, seventeen year old Adhiban (tenth seed) and sixteen year old S.P. Sethuraman (sixteenth seed) made mockery of the seeding by grabbing the winner and runner up spots. Fifteen year old Vidit, who finished fourth made it memorable for the young brigade, forecasting the strength of future Indian chess.

Adhiban had an exemplary performance from fifth to ninth round defeating all the opponents who came in his way, which included three GMs. Five consecutive wins in National Premier championship might have never been heard of. In the process, he also secured his maiden 13 game GM norm. Besides him, Sriram Jha, who played in the recent World Chess Cup, secured his third and final GM norm. Swapnil Dhopade did proud to the host Maharashtra by achieving an IM norm and also Rahul Sangma got an IM norm.

- International arbiter and a retired professor of Chemistry