The University of Texas at Dallas and the University of Belgrade matched up this weekend for the fifth Internet-based Trans-Atlantic Cup contest. This match represents the merger of modern technology, education and chess development. The teams gather in auditoriums seven time zones apart and play via Internet Chess Club. Video feeds projected on large screens give both Universities a view of the cross-ocean action.

The opening speech and honorary first “mouse click” on Belgrade part was given by the basketball legend Vlade Divac, who is also President of the Serbian Olympic Committee.

ECU Secretary General Sava Stoisavljevic highlighted that every year UT Dallas is awarding winners of the European Youth Championship in categories Boys under 16 and Girls under 16 with valuable scholarships. Earlier this fall, the ECU awarded its Silver Medal to The University of Texas at Dallas for the University’s “invaluable contribution to European chess.” (More bellow) 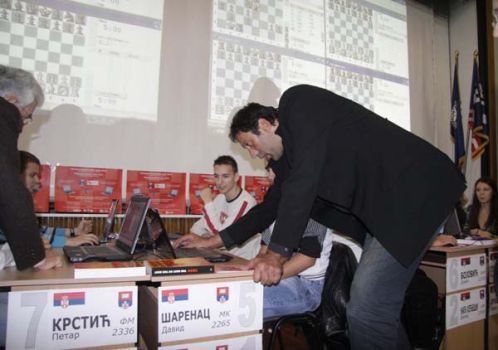 The time control was 40 minutes per player + 5 seconds increment per each move. University of Belgrade won the battle convincingly by 11.5-4.5 and reduced the overall UT Dallas lead in won matches to 2-3. Vlade Divac has promissed to visit UT Dallas soon. 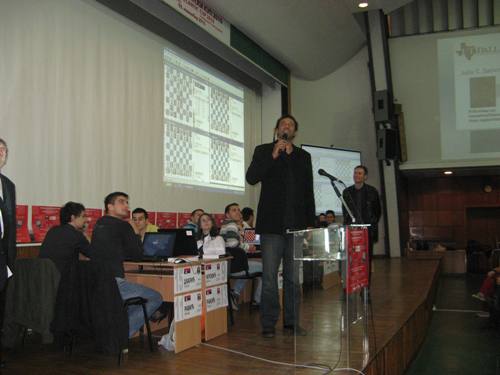 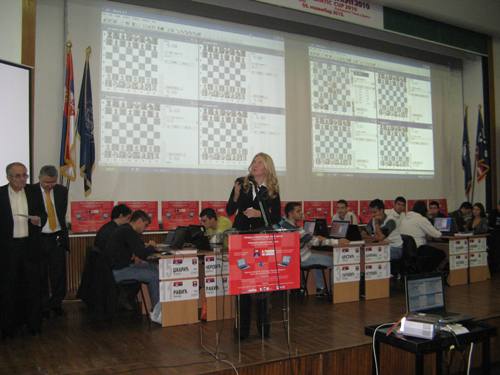 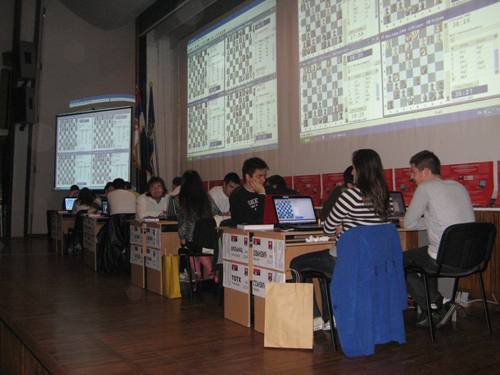 The UT Dallas Chess Team fell to opponents from the University of Belgrade last Friday, bringing the Comets’ three-year winning streak in the annual Transatlantic Cup match to an end. The game ended with a final point tally of 11.5-4.5, in favor of Belgrade’s team.

The stateside portion of the Internet-based match was played in the School of Management Davidson Auditorium. The 16 UT Dallas team members, whose chess ratings ranged from the highest possible designation of Grandmaster (GM) to unrated status, played for about an hour and a half in a rapid-style competition.

“There were different expectations this year,” said International Master (IM) Sal Bercys, a senior majoring in accounting. “In other years we were the favorites to win, but not this year.”

IM Julio Sadorra, Bercys and National Candidate Master Courtney Jamison won their games outright. Three other games resulted in a draw. Bercys said that preparation was key to his individual victory, while Jamison said the turning point in her game came halfway through, on move 27.

“My opponent and I had traded pawns on the queenside, but my two bishops worked together to protect my last pawn on that side while his pawn, on a3, was too weak to keep,” she said. “Eventually, he lost that pawn, ran his time down, and other factors led up to him losing a rook. He resigned shortly after.”

Coach Milovanovic said, “IM Bercys and IM Sadorra demonstrated with their wins that they are in good shape. Courtney also produced a good win against her opponent.”

Jamison, a freshman majoring in biology, considered the large team format an exciting part of the competition.

“I’ve played in matches against individual people, but the team component really makes things interesting,” she said. “To be on stage with 15 other players, competing with another team across the globe, is definitely an honor.”

Chess Program Director Jim Stallings cited the disparity in competition levels in the lower half of the UT Dallas team roster as one reason for the loss.

“Going into this year’s match, we knew were at a ratings’ disadvantage on the lower half of the roster,” he said. “However, when one looks at the final score, one realizes that the University of Belgrade deserves credit for playing well throughout their roster. Congratulations to them.”

Earlier this fall, the European Chess Union (ECU) awarded its Silver Medal to The University of Texas at Dallas for the University’s “invaluable contribution to European chess.” It was the only medal awarded by the ECU this year.

The ECU, comprised of 54 federations, formed an international partnership with UT Dallas after the 2006 Transatlantic Cup contest between the University and the University of Belgrade. The partnership pledges scholarship support from UT Dallas for young master-level chess champs at the European Youth Championships of the Boys Under-16 and Girls Under-16 sections.

“Enthusiasm for the partnership was there on both sides, from Day One,” he recalled. “We view it as an international recruiting tool to reach some of the best young minds abroad, who both excel in chess and who possess insatiable intellectual curiosity.”