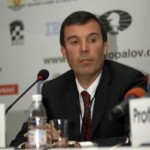 Silvio Danailov, one of the four candidates for President of ECU, has announced his ticket for the elections in a press release via his official site.

Boris Kutin to run another time for ECU