Topalov and Polgar in the final of UNAM Torneo Cuadrangular

Veselin Topalov defeated Manuel Leon Hoyos with the convincing 3,5:0,5 at the second semi final of the Torneo Cuadrangular, part of the chess festival of the 100th anniversary of the Universidad Nacional de Mexico.

In front of the full Teatro Juan Ruiz de Alarcon, Topalov employed good time management to bring down the Mexican in the first two games. Complicating the positions where possible, Topalov enjoyed solid time advantage, which he converted in full two points. The psychological pressure was too much for Leon Hoyos in game three, but in game four he managed to get a comfortable draw (replay bellow).

“To Manuel happened the same thing as to me when I was young,” said Topalov at the press conference. “You respect the higher ELO of your opponent and you think twice about each move, thus ending in time trouble.”

Topalov added about today’s final, “I will be very careful against Polgar, when you play against her you think you are doing good, but then something happens and the game turns out to be very complicated.” 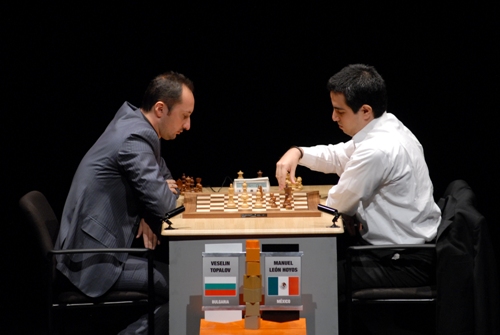