All games decided, Caruana, So and Laznicka make winning start

New Delhi, June 22: The inaugural Airports Authority of India Grandmaster chess tournament got off to a rousing start, as all three games ended in a decisive manner at the AAI Officer’s Institute on Wednesday.

The young and energetic field, with an average age of just over 20 years but 2662 in Elo Ratings, produced some exciting games. The Indian duo, however, had a disappointing start with both Krishnan Saskiran (black) and Parimarjan Negi losing their games. Sasi lost to Wesley So in 38 moves before the time control while Negi went down to top seed and World Junior No. 1, Fabiano Caruana in 47 moves. Replay the games with computer analysis.

In the third game Viktor Laznicka (Cze) with black pieces got the better of Hou Yifan (China) in a Caro-Kann Classical. After more than six hours, Laznicka won in 65 moves in a tough battle. Laznicka said he could have won much earlier when he was two pawns up but he missed many winning lines. “I should have won it much earlier, but I missed them,” he said smilingly. 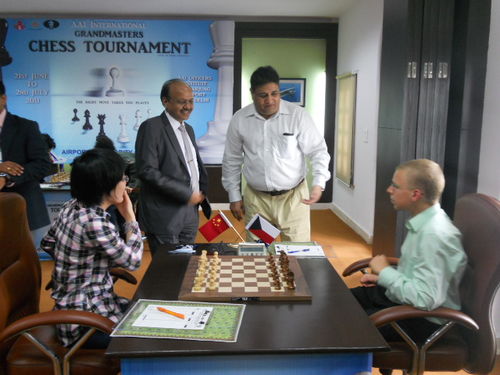 Wesley So, the young Filipino, who admits to a big weakness for Indian cuisine, scored a fine win over Sasi just before the first time control, as the Indian facing a clear loss allowed the flag to fall as he had three more moves to make with three second left on his clock.

“I have played Sasi before four years ago in Macau, but that time we drew and I had black. I was a bit surprised to see him play Four Knights in the Sicilian and I thought he would play Najdorf variation. I realized I was winning about three or four moves before he resigned. It has been a good start and I will celebrate with some more good Indian food and a nice swim in this hot weather,” said the smiling and big built, 18-year-old Filipino.

Sasi, who while drawing with Wesley So in 2007, had gone on to win three gold at the Asian Indoor Games, said, “It was disappointing. I missed a queen move around the 34th. Anyway there is a long way to go in the tournament.” 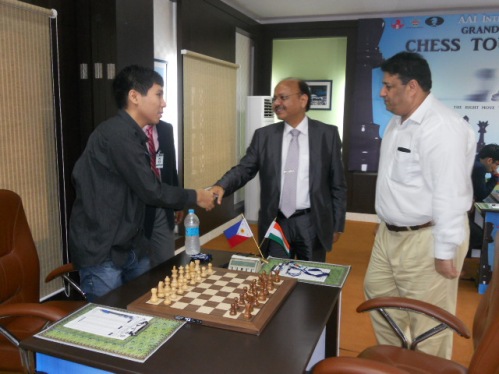 Negi, who five years ago became the youngest Indian Grandmaster ever, lost his way some around the late stages of the middle game in a Ruy Lopez, Anti-Marshall against top-seed Fabiano Caruana. In fact, there was a time when Negi seemed better off as he was an exchange (rook for a minor piece) up. But the more experienced Caruana held out well and used his double bishops against Negi’s double Knights. Caruana’s twin bishops became active and controlled key squares as Negi’s own Knight was seemingly immobile on g2.

“I was actually trying to gain equality and then it is not clear where he made a mistake and went into a losing position. Both of us were in some kind of time trouble. I realized it was a no-risk situation for me. I could win, but if I played right I could not lose, so I kept going. There really is no time to celebrate in such a long tournament and I have been spending time preparing because it is too hot to go out,” said the Caruana. 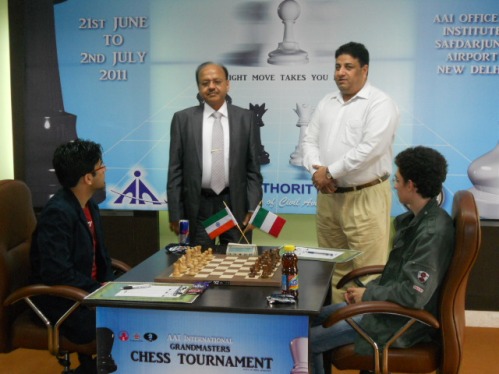 Speaking of the opening ceremony, which also a cultural programme and a huge media representation, Hou Yifan, in an appropriately black-and-white check designed long skirt, said, “It was great to see such a large media gathering for a chess tournament. The game is surely very popular in India.”

Results of the first round: Parimarjan Negi lost to Fabiano Caruana; Hou Yifan lost to Viktor Laznicka; Wesley So beat Krishnan Sasikiran. See more photos from the first round.