Caruana stretches lead with a win over Negi

New Delhi, June 28: Fabiano Caruana of Italy living up to his top billing stretched his lead to a full point as he beat Parimarjan Negi after a marathon 98 moves in the sixth round of the inaugural AAI Grandmasters Chess Championships on Tuesday. Meanwhile the other two games in the round ended in draws.

Caruana with his fourth win in six games now has five points and is a full point clear of Viktor Laznicka, who was disappointed with his draw against Women’s World Champion, Hou Yifan. In the other game, Krishnan Sasikiran’s winning streak was halted as he was held to a draw by Wesley So of the Philippines.

Sasi has 3.5 points in third place and So has three points. Negi has 1.5 points and Yifan has one. 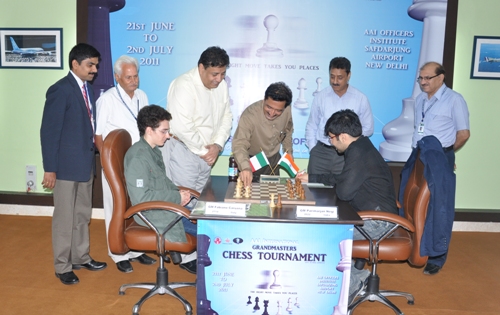 A day after the only rest day in the inaugural AAI Grandmasters Chess Tournament, as two of the three games ended in draws, Parimarjan Negi suffered his second loss of the tournament at the hands of World Junior No. 1 Caruana, who has beaten him in the opening round of the event.

In a Sicilian – Najdorf, Caruana with white was determined to keep the advantage and he kept his slight edge. But Negi did have the clock on his side and the position looked fine for him. He had a lot of time advantage over his rival, but just then he made a mistake in the middle game, as has been the trend this tournament.

Into the middle game, Caruana displayed his greater experience as Negi sought a risky route. Caruana sacrificed a queen for three pieces and then kept pushing the Indian back. Negi for his part, knew he was fighting a losing battle but kept hoping for a draw, which was not to be. He finally resigned after 98 moves and after both players queened their pawn. Negi had two queens to Caruana’s queen and three pieces. Caruana kept his advantage intact and eked out a fine win. 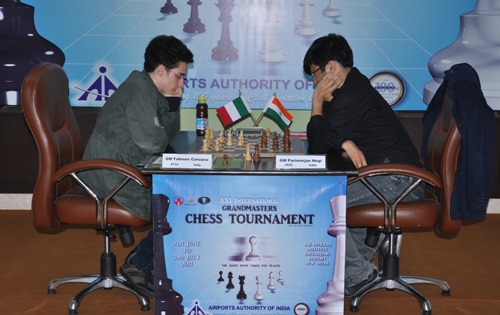 “It was a tough and tiring battle, but I knew I was winning so I had to keep going,” said Fabiano Caruana with a smile of a tired but satisfied man.

Sasikiran who lost to Wesley So in the first leg of the tournament was unable to avenge that defeat as they drew the Anti-Meran in 50 moves. Back in 2010 Sasi beat So in the Asian Games in Doha enroute to the gold medal, but this time around even with white pieces, Sasi was unable to conjure up a win. 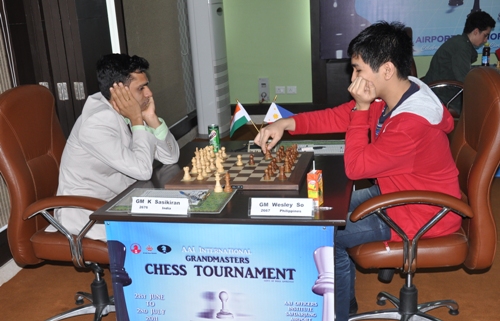 Krishnan sasikiran and Wesley So

Laznicka with white and fully rested after the first half of the tournament may well have expected a full point from the off-form Hou Yifan. But the women’s world champion, playing black, defended well and held the Czech champ to a draw in 32 moves following a Catalan opening.

Laznicka trying to stay in touch with the leader, Caruana, was disappointed with the draw. “I must admit that I am disappointed. With white I was hoping for a better result, but she defended well. I could not find a way, I am not sure where I made a mistake, if any,” said Laznicka, who saw a bit of the city with his parents on his the rest day.

Hou Yifan admitted she was finding problems. “I have been in time trouble as I was not able to adjust to the fact that there was no incremental time here and I also made a lot of mistakes. But last two rounds were better and I hope I can play better in the coming games,” said Yifan. “I have enjoyed the city a lot and I saw a few well-known spots in Delhi like India Gate and Qutub Minar and I would love to come to India in the future for more events.” 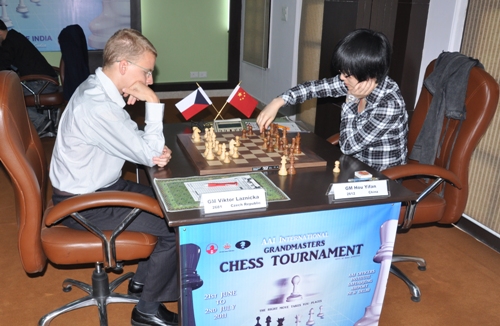 On the rest day on Monday, the players went for some sight-seeing to soak in some of the landmarks of the Indian capital.

There are four more rounds to go in the 10-round Category-17 tournament. 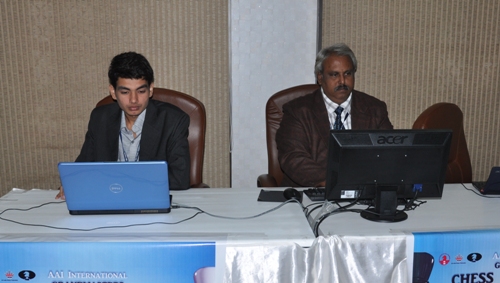