The reigning World Champion wins by 3.5-0.5 in Tashkent, Uzbekistan

The reigning World Champion Viswanathan Anand and the 17th World Champion Rustam Kasimdzhanov played a four-game rapid match this Sunday in Tashkent, Uzbekistan, immediately after the traditional Georgi Agzamov Memorial. The time control was 25 minutes plus 10 seconds increment per player.

In the first game Kasimdzhanov defended with the Petroff and easily achieved equality. A draw was signed soon.

The second game saw a tense struggle after the Catalan opening. It looked like Anand is under pressure, but then he found a magnificent positional sacrifice and completely turned the tables.

The third game was Petroff again, but this time Anand changes the variation and goes directly after the enemy King. A wonderful attacking effort left Black in the mating net.

In the fourth game the already demoralized Kasimdzhanov carelessly ran after the queenside pawn, allowing Anand to launch yet another deadly attack. The final score is 3.5-0.5 in Anand’s favour. Replay the games bellow.

On Monday, 28th March, Anand hosts a training session for the most talented young players of Uzbekistan. 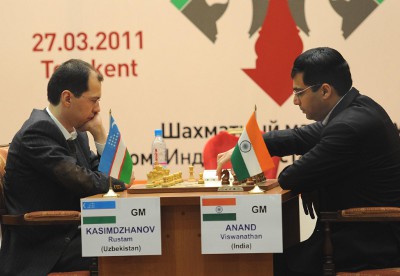