Grandmaster norms for Bitoon and Barbosa

Filipino chess prodigy Wesley So clinched the Battle of the Grandmasters title by winning the National Championship round robin tournament which ended 23rd July in Manila, Philippines.

The 17-year-old grandmaster from Bacoor, Cavite formalized his claim to the title at the National Press Club (NPC) in Manila.

So finished with a total of nine points, a full point ahead of his closest rivals in the tournament supported by Pilipinas Shell, Manila Pavilion Waterfront Hotel and Casino, Philippine Sports Commission, Philippine Olympic Committee, NPC, “Remate” and “Hataw” (JSY Publication).

It was his fourth straight triumph in as many tries in the Battle of the Grandmasters, a brainchild of National Chess Federation of the Philippines (NCFP) Chairman/President Prospero A. Pichay, Jr. 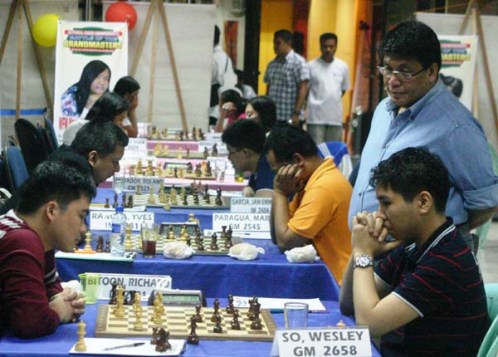 NCFP Chairman/President Prospero A. Pichay, Jr. watching over the game of Wesley So at the National Press Club in Manila

The country’s highest rated player won his first four matches and cruised from there. He earned P150,000 for his effort.

“This is a very tough tournament. It may look easy because I led from the start. But we know that until the final round I was not sure of becoming champion,” said So.

With So already out of reach, GM Eugene Torre and International Master Oliver Barbosa quickly split the point against their respective opponents. Both Torre and Barbosa finished with 8 points, but the latter nabbed the runner-up honors through the win-over-the-other rule.

International Masters (IM) Richard Bitoon and Oliver Barbosa earned their grandmaster norms in the 9th round. Bitoon and Barbosa now each have two GM norms under their belt.

Bitoon got his first during the 2008 Singapore International Open while Barbosa earned his during the 10th Asian Continental Individual Chess Championships last May.