Round two insights by Stewart Reuben

Yesterday unquestionably the game of the round in a competitive sense had to be that between the young Italian/American Fabiano Caruana and the veteran superstar Viktor Korchnoi. Viktor was puzzled as to why he was on board three against the 18-year-old, but surely he has played in many Accelerated Pairing Swisses that I have run, dating back as far as 1980.

John Saunders suggested it was actually 1880, but I pointed out I wasn’t actually involved in international chess organisation then. By the time we spoke over dinner, Viktor was in good humour as you would expect. He told me his previous score was 0-4 with no draws against the boy. In what other sport is an encounter at all likely between two players 60 years apart in age? Well, perhaps bridge, but in that game it is difficult to find a player under 30. 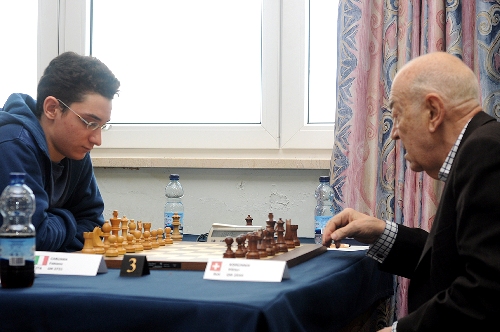 The other game I found time to kibitz was that between Pia Cramling and Nigel Short. The advantage of looking at Nigel’s games is that he is perfectly prepared to come and analyse his games in the commentary room afterwards. He explained that he got totally confused at the point where he played 10…Bxg3 followed by 11…Bxf3. This enabled Pia to respond 12 gxf3 giving her the better game. Had he first played 10…Bxf3, then no doubt she would have played 11 Bxf3. Why did he get confused? Because he needed a caffeine injection at that point. You don’t usually get this type of insight into the reasons for people’s moves. 23 b5 would have been far more active for White and she would probably have then stood somewhat better.

Meanwhile yesterday the electronic board system had something of a nervous breakdown, presumably because there were so many interesting encounters. Thus we were not able to access the top five boards directly. But no problem, Thomas Rendle in England enabled us to access the games for the commentary room using the Monroi website where players had keyed in the moves by hand. 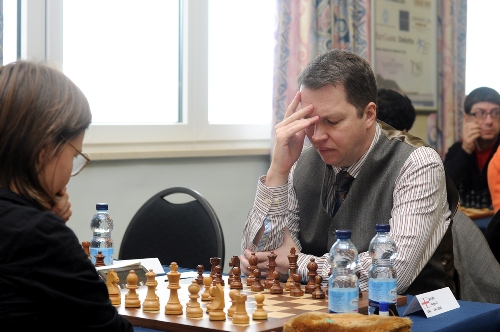 The event this year has a slightly different format from the previous editions. It started with a tandem simul on Sunday by the Russian Kosintseva sisters. Then the Challengers A and Amateur A started Monday morning. Monday evening saw the traditional opening ceremony including the drawing of lots for the top pairings and the equally traditional Caleta Hotel hospitality.

Tuesday afternoon the Masters got underway. This evening Vassily Ivanchuk gave a master class to a packed house, probably spread over all the continents. He went through his win today and also another from 1984, purely from memory (including several of the most attractive sub-variations). This was greeted by rapturous applause – with good reason. Again, in what other sport would this happen after quite a gruelling game? 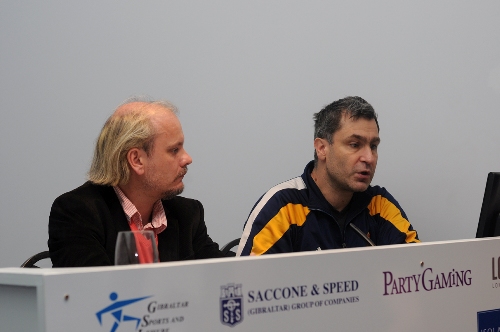 People often ask how many people are playing and so on. This is currently impossible to answer correctly as more people are playing in Challengers B and Amateur B. Also it is not unknown for people to turn up late. Currently we have 231 players in the Masters, the biggest ever turn-out; 55 in Challengers A; and 30 in Amateur A. There are 53 grandmasters competing, three of whom are rated over the elite level of 2700; 15 are rated between 2600-2699; 31 between 2500-2599. There are 50 different federations in the congress, counting players from Gibraltar separately. There is no doubt this is the biggest and strongest of the series. To think, in 2003 there were just 66 entries.

Round three is in progress, follow the games live with computer analysis