633 participants from 35 countries competed in the four groups

The 86th Paris Chess Championship was held from 2nd to 10th July at the Stade Pierre de Coubertin, 82 avenue Georges Lafont 75016 Paris. The Championship was played in 4 Groups and was open to all players of FIDE federations.

Indian Grandmaster Arun Prasad defeated his compatriot SP Sethuraman in the last round and won the main tournament with a total of 7.0 points. Earlier co-leaders Sergey Fedorchuk and Magesh Chandran Panchanathan made a draw and a loss respectively and slipped down the rankings. Fedorchuk shares the second place with GM Ruben Felgaer.

The A Open was convincingly won by Belgian Albin Dal Borgo (8.0 points, full point ahead of the rest of the field). The trophy in the B Group goes to the French Thaymour Bonneville and finally C Open was won by the young Daniel Pietras from Poland. 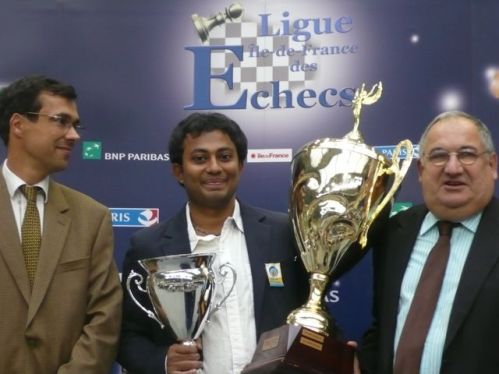 633 participants from 35 countries competed in the Championship. Full crosstables.