The 5th Annual Philadelphia Open was held as usual over the Easter weekend from April 20-24, 2011, at the upscale, luxury Loews Philadelphia Hotel, rated Four Diamonds by AAA, 1200 Market Street, Philadelphia.

The Open Section was won by Georgian Grandmaster, Tamaz Gelashvili, who finished with 7.5/9. Gelashvili recovered from his Swiss Gambit draw with IM Jay Bonin in round 1 to top the 105 player section.

Gelashvili won four in a row in rounds 2 through 5 including critical victories over GMs Nikola Mitkov and Eugene Perelshteyn lifting him to the top of the standings with GM Julio Becerra.

A quick draw with Becerra followed by victories in round 7 and 8 left Gelashvili in clear first going into the last round, half a point ahead of Becerra. A tough draw in the final round with GM Jiri Stocek was enough to seal the title after Becerra could only draw with Perelshteyn.

Luke Harmon-Vellotti scored an IM norm, which he had secured after his round 7 victory over GM Mikheil Kekelidze. 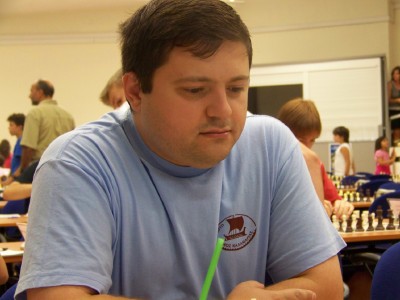