Ed Andaya analyses the major events of the year

While we’re thinking about it, here’s the 10 most memorable stories in chess in the year 2010.

The news of Campomanes’ death dominated the headlines of major local and international newspapers.

The list, of course, won’t be complete without a mention of the Filipinos’ surprise silver-medal finish in the recent Asian Games in Guangzhou, China.

Here’s a look at the top 10 stories that made 2010 another memorable year in chess.

Campomanes, who served as FIDE president from 1982 to 1995, passed away “peacefully and with quiet gentleness around him” at age 83 in Baguio City last May 4.

The ‘Grand Old Man’ of chess, who cheated death several times, including a near-fatal car accident in faraway Turkey, succumbed due to a lingering illness.

Former FIDE general secretary Casto Abundo said Campomanes will always be remembered for turning FIDE into a truly universal body by reaching out even to Asian, African and Latin American countries.

“His legacy is spreading chess all over the world, raising FIDE membership.”

When Abundo went to see him during his final hours in Baguio City and thanked him for all his help, Campo flashed his trademark smile and replied, “We had fun.” 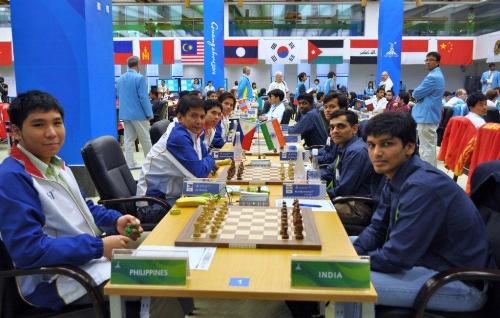 2. A silver medal that glitters like gold in the Asian Games

Let’s admit it, the Philippine team’s silver-medal finish in the Asian Games chess competitions in Guangzhou, China is a major, major surprise even for ardest followers of the game.

With China, India, Vietnam and the former Russian republics sending their best players in Guangzhou, the Philippines is hard-pressed to perform better than their seedings.

But the Wesley So-led five-man Philippine team did the unthinkable and pulled off a pair of stunning upset wins over Asian heavyweight India to set the staqe for the much-awaited gold medal match against host China.

The team lost to the vaunted Chinese side but earned a lot of respect with a performance worthy of a gold medal.

The silver medal was also a welcome addition to an under-achieving delegation that could only manage a disappointing 4-6-9 gold-silver-bronze medal haul.

3. Nobody, nobody but Wesley So

So, bless his heart, continued his meteoric rise to the top of the chess world with a more than respectable performance in the year just ended.

Although he did not win any major international tournament this year, the 17-year-old Filipino champion from Bacoor, Cavite played well enough against top-notch foreign players to earn the respect and admiration of the international chess community.

For the third straight year, he also ruled the ‘Battle of GMs’ chess championship, ahead of Antonio, Torre and other top local players.

At the stroke of midnight last Dec. 31, So also improved his ratings to a record high ELO 2674 — good for No. 64 in the world’s Top 100. He also climbed to No. 3 overall in the world’s top junior players, six notches higher than his previous ranking three months ago.

Another Olympiad, another record for Eugene Torre

The Philippines finished only 50th out of 144 countries in the 39th World Chess Olympiad in Khanty-Mansiysk, Russa, but local chess fans need not despair.

Torre made it a lot more memorable with his record 20th Olympiad appearance — exactly 40 long years after making his debut as the country’s board two player behind IM Renanto Naranja in the 1970 World Chess Olympiad in Siegen, Germany.

A close friend-confidant of the late former American world champion Bobby Fischer, Torre tied the distinguished record of GM Lajos Portisch of Hungary for most Olympiad appearances at 20.

The multi-titled campaigner from Iloilo, who turned 59 last Nov. 4, played his 237th game in the Olympiad – second only to Portisch (260 games) but way ahead of GM Svetozar Gligoric (223 games) and GM Miguel Najdorf (222 games).

In 2006 Turin Olympiad, Torre also made a record when he appeared in his 19th straight Olympiad, erasing the mark previously held by Paul Westerinen of Finland.

Return of the ‘Prodigal Son’

GM Rogelio Antonio waged a short-lived word war against the NCFP, headed by its president/chairman Prospero “Butch” Pichay and secretary-general and Tagaytay City Mayor Abraham “Bambol” Tolentino, for its decision to suspend him for his failure to participate in both the Campomanes Cup and Pichay Cup.

The Calapan, Oriental Mindoro bet was also taken out of the Olympiad team for the second straight time for his ‘action detrimental to the association.

Although he even threatened to take his case to court, Antonio finally relented a heart-to-heart talk with Pichay.

In the end, the so-called ‘Prodigal Son’ was reinstated to the national team in time for the Asian Games.

And Antonio, ever so eager to prove his worth to the team, delivered some of his b est games that catapulted the country to a silver-medal finish. As they say, all’s well that ends well.

The Filipino chess world also woke up on a lovely September morning with the good news that Salvador became the country’s newest GM.

The little-known player from San Jose Del Monte, Bulacan, who migrated to Italy a few years ago, earned his third and last GM norm by winning the title in the 11th Fermo-Porto San Giorgio inItaly.

The long search of the United States-based Barcenilla for the elusive GM title also ended in 2010 when FIDE finally decided to bestow him the title during the 81st FIDE Congress.

Despite the negative controversy generated by the hostage-taking drama that took the lives of several Hong Kong nationals at the Rizal Park, the NCFP successfully hosted two major international chess tournaments — the first-ever Campomanes Memorial Cup and the Pichay Cup chess championship, both at the Ninoy Aquino Stadium.

Initially, there were fears that top players will beg off from the tournament for safety concerns, but more than 50 foreigners came in droves to take part in two of the biggest tournaments.

No less than $1-million put up by FIDE president Kirsan Ilyumzhinov, was at stake in the prestigious competition.

Although he’s only 12 years old, Bersamina turned out to be the next most important young player for the year just ended.

The Pasay City-based Bersamina posted the best scores in the final four rounds and wound up a strong third in the Asian Youth Invitational Chess Championships in Beijing last July.

A high school freshman at Far Eastern University, Bersamina compiled six wins, two draws and a loss in a scintillating performance highlighted by his win over eventual champion Wei Yi of China.

Riding the new-found popularity of chess following the rise of So and other new GMs, two-time Olympian GM Jayson Gonzales moved heaven and earth to establish the Philippine Academy for Chess Excellence (PACE) in the early days of March 2010.

No less than Pichay hailed the creation of PACE as a step in the right direction. “The establishment of PACE will surely help the NCFP achieve its goals of producing more world-class players,” said Pichay during the induction of officers at the PACE headquarters along Mindanao Ave.

But even long before the establishment of PACE, Emperado is quietly — and patiently — teaching chess to aspiring young players through the highyl-acclaimed Milo-Checkmate program of the Metropolitan Chess Club.

Before the end of the year, Emperado even organized a ‘Young Knights League’ exclusively for Milo-Checkmate alumni. Also worth mentioning is the hugely-successful Leviste Cup chess tournaments organized twice-a-year by Datu at the Ateneo de Manila University, which greatly helps young players hone their skills by playing against one another.

The year in chess won’t be complete without mentioning Far Eastern University, the most dominant collegiate team in the country and home of the best and the brightest collegiate players.

Led by coach Gonzales, the Morayta-based Tamaraws made their presence felt in major chess competitions, including the Singapore Open.

In the NCAA, the Joel Pimentel-led St. Benilde outclassed the opposition to regain the title it lost to Letran