Susan Polgar and Paul Truong in a large interview

The Knight Riders were successful at this year’s Final Four. The team led by Susan Polgar and Paul Truong managed to win a title in what can be viewed as the Final Four with largest mass media coverage.

After the success, coaches Polgar and Truong gave an extensive interview to Dr. Hal Karlsson, Associate Professor of GeoSciences at Texas Tech University.

For more about the Final Four visit http://susanpolgar.blogspot.com/ 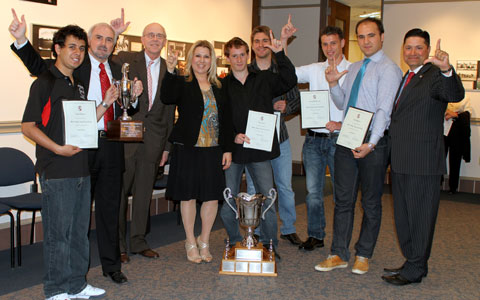 Dr. Hal Karlsson: Susan and Paul, first of all, congratulations! This Final Four victory is simply fantastic and quite unexpected. How did it happen?

Susan Polgar: Thank you. I think the team did great, and even though we were the lowest seed, as a team, we believed that we could win. I also think we were more unified and working together more as a team than our competitors. I’m very proud of our guys that they gave their all.

Paul Truong: It is a good feeling for the entire team because they’ve worked very, very hard to be able to accomplish this. As Susan said, they gave it their all and they deserve it.

SP: They were also fearless. They were not intimidated facing much stronger opponents, even ones they had bad records against in the past. In the first round, Grandmaster Timur Gareev of UTB, the highest rated player in Texas, offered our top board, Grandmaster Anatoly Bykhovsky, a draw in a very complicated position. Bykhovsky just lost to Gareev in an earlier encounter in Berkeley. Even with that in mind, Bykhovksy refused the draw offer against a much higher rated opponent and went all out for the win.

In the critical final round, a similar thing happened. Grandmaster Leonid Kritz of the defending champion UMBC, the highest rated player of the entire Final Four, offered our team captain Grandmaster Davorin Kuljasevic a draw with the white pieces. In the same matchup last year’s Final Four, Kuljasevic lost to Kritz. Just as Bykhovsky, Kuljasevic refused the draw offer and went all out for the win. Both of them succeeded and they gave our team two vital points toward the national title. As their coach, I could not be more proud of this.

HK: Clearly all the teams must prepared very hard for the Final Four given what was at stake here. But what accounted for Texas Tech’s success.  What was the secret?

PT: I believe the secret is quite easy. We simply worked harder. We not only studied the games of our opponents just as everyone else, but we also study our opponents’ demeanor, body language, movement, facial expression, pattern of thinking and decision making, etc. We dissected every inch of every possible aspect of the game. We put countless hours into the preparation. Even after our players were asleep, Susan spent hours double checking all the analysis to make sure there was no error. We were lucky to even get a few hours of sleep.

It does not mean that we will succeed every time. It just means that we will put our team in the best possible position to win. We had a similar approach when Susan and I ran the 2004 U.S. Women’s Olympiad program which brought home the first four ever Chess Olympiad medals (2 gold and 2 silver) for the United States. If you want to win, you have to be willing to work harder than everyone else. No one will just hand the title to you. If you want it, you have to get it.

Another thing we did different than other teams is our approach before the start of the Final Four. The team arrived in Washington, D.C. very late Thursday night. We had Friday free until about 6 p.m. Other teams stayed in the hotel to do some last minute preparation. Being a world class competitor herself, Susan realized that the players were under tremendous pressure. So she decided to give them two choices:

1. To stay in the hotel like other teams to cramp in last minute preparation.
2. Go for a tour in Washington, D.C. to relax, stay fresh, and build further team chemistry.

The players voted to go to D.C. So we spent the day on the famous Double Decker bus tour to visit the White House, Lincoln Memorial, Washington Monument, the Capitol Building, and other landmarks. The players had plenty of good times and good laughs. It worked out great. But if it did not work as planned, I am sure others would be quick to criticize her decision. But as a coach, you need to make tough decisions.

HK: That is impressive. But Susan also accomplished something else in this Final Four.

PT: Yes. Last year, Susan became the first female head coach to take a men’s division I team to the Final Four. This year, she is the first female to take a men’s division I team all the way. You cannot even imagine, let’s say, a female coaching a men’s basketball team or men’s football team to the national title, but in chess, she showed that it can happen.

And the success was not only in division I. In just in the past two years, the Knight Raiders also won the national division II, III, and IV titles, in additional to many other individual honors. This is simply another gender barrier that she was able to break. What is even more amazing is this is only our second year competing in division I.

UTD and UMBC have been ruling the collegiate chess world for the past decade. For us to catch up with them on this level, this fast, was pretty amazing. I am sure the competition will be a lot tougher next year as all the schools will try to improve their rosters.

Susan now has done it all. She won Olympiad gold, five of them. She won the Women’s World Championship Triple-Crown (Rapid, Blitz, and Classical). Her students have won National Scholastic Championships and now Collegiate Championships. But don’t worry, she’ll find more barriers to break, I am sure.

HK: Was there any particular player who stood out for Texas Tech in this Final Four?

SP: No. It was total team work. They fought hard as a unit and a different player came through for us in each round. It was Bykhovsky in the first round, Sipos in the second, Kuljasevic in the final round. Diamant was solid all the way through. And Aleskerov, as a reserve player, was the biggest cheerleader for his teammates the whole time. Just like the famous song by Sister Sledge, “We Are Family”, the Texas Tech Knight Raider family.

HK: I saw the Final Four chess boards the Knight Raiders were holding up. Those look unique. Did you make those and how can one get one of them?

SP: Those are very special Final Four commemorative boards. They are not for sale. Only twenty of them were done and they were made by our friends at GLOSgames.com. This is an American company out of Kansas City, Missouri. They have done a lot of good things to promote chess and bring kids into the game. When I told them about Final Four, they immediately designed and produced these twenty special boards to give out to each of the four teams and the sponsor, Booz Allen Hamilton. They also sponsored other scholastic events of mine in the past. It is a good company and good people and I am proud that they support chess and the Knight Raiders. You cannot buy these boards but you can design your own chess board with them or use one of their over 110,000 designs.

HK: That is pretty neat. So what is the next step? A long celebration or vacation?  I understand the team is going to Vegas (not Disney World like football players).  What was that all about?

SP: There is no time to rest. Winning it is hard. But defending it is even harder. We already started to prepare for next year with recruiting. We have a tradition of excellence at Texas Tech and we hope to win many more championship titles.

We are lucky to have strong support from Chancellor Hance, President Bailey, Provost Smith, our supervisor Vice President and Vice Provost Dr. Juan Munoz, our donors, and so many other people at Texas Tech and in Lubbock. To have people waiting to cheer the chess team on at the airport when they returned at midnight was pretty incredible. The media also prominently covered the team success. Everyone believes in us and we want to continue making all of them and this university proud. We will do everything in our power to help Texas Tech become a Tier One university. Through chess, we will attract some of the greatest minds to this university.

HK: What other goals does SPICE have in mind?

SP: As the chairwoman for the FIDE (World Chess Federation) Commission for Women’s Chess, I am working with SPICE to promote women’s chess and help raise the playing level of the next generation through various important initiatives. SPICE is also actively working to get chess in more schools. This is a very important part of our goal.

University Interscholastic League (UIL) of Texas, the largest inter-school organization of its kind in the world, has approved the proposal from SPICE to include chess puzzle solving as a statewide competition. This can potentially be the biggest scholastic chess initiatives in the United States as more than 2,000 schools in Texas are competing in a number of UIL competitions each year.

I am also hoping to work closer with FIDE to enhance various chess in the schools and chess in education projects in the United States. The future of chess is very bright.

HK: Thank you, Susan and Paul, for your time. Once again, congratulations and Go Tech!  Check’em Knight Raiders!

Dr. Hal Karlsson is original from the chess loving country Iceland. He is an Associate Professor of GeoSciences at Texas Tech University. He is also the founder of SPICE as well as a student advisor for the Knight Raiders.

Susan Polgar is the Head Coach of the Knight Raiders Chess Teams and the Director of SPICE at Texas Tech University.

Paul Truong is the Assistant Head Coach of the Knight Raiders and the Director of Marketing and PR for SPICE at Texas Tech University.