Success for the team of Susan Polgar

What a week it has been for the Polgar sisters! Just as Judith Polgar conquered a bronze medal in the men section of the European championship, Susan Polgar managed to lift a major title as coach. Comprised of three GMs and one IM (GMs Anatoly Bykhovsky, of Israel, Davorin Kuljasevic, of Croatia, Andre Diamant, of Brazil, IM Istvan Sipos, of Hungary and Faik Aleskerov, of Azerbaijan) and coached by world champion GM Susan Polgar, the Texas Tech Knight Raiders Chess Team won the Final Four chess championship this weekend in Washington.

“We expected a very close battle even though we were the fourth-ranked team,” GM Polgar said for Jamaal Abdul-Alim at the US Federation website. “Often times, a strategy, not just on the board but ‘off the board,’ that makes the difference,” Polgar said, comparing what her team did to how various sports teams might study films of their opponents in action. 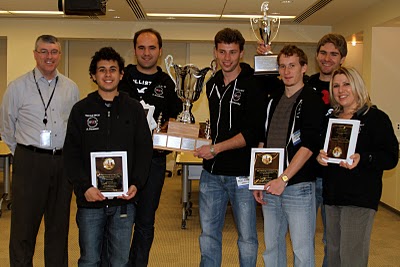 In only our second year competing in Division I, team captain GM Davorin Kuljasevic scored a clutch win against the highest rated player, GM Leonid Kritz, in the final round to bring the biggest College Chess National Title to Texas Tech!

This is a huge upset because Texas Tech came into the tournament as the 4th seed with average rating of 50 points lower than the other 3 teams. This is like David versus Goliath.

This is the strongest Final Four in history as each team has at least 3 Grandmasters and 1 International Master. The average rating of the four teams is about 2580! If the tournament starts over tomorrow, there is no telling which team will win. A single move could decide the fate of the entire tournament.

I would like to thank Booz Allen Hamilton, Inc. for sponsoring this spectacular event. The entire Final Four was first class all the way.

USCF on the event

In a groundbreaking victory that literally hinged on the last match of the last round of a collegiate tournament known as the “Texas Tech Prevails in Final Four of Chess,” underdog Texas Tech University clinched the title over the weekend for best college chess team in the nation.

Comprised of three GMs and one IM and coached by GM Susan Polgar, the Texas Tech Knight Raiders Chess Team bested long time exclusive dominators of the tournament — the University of Maryland, Baltimore County(UMBC) and the University of Texas at Dallas (UTD) — in a two-day, three-round tournament held here April 2 and 3.

The upset winnot only means that Texas Tech gets to bring home the Final Four tournament’ sprestigious President’s Cup and all that it symbolizes home to Lubbock, TX.

It also means the players — GMs Anatoly Bykhovsky, of Israel, Davorin Kuljasevic, of Croatia, Andre Diamant, of Brazil, IM Istvan Sipos, of Hungary and Faik Aleskerov, of Azerbaijan — will be given top consideration for any summer internships for which they might qualify at international strategic and technological firm Booz Allen Hamilton, a Virginia-based defense contractor that sponsored and hosted the Final Four tournament, as well as a simul by GM Ray Robson and a scholastic chess tournament for area students.

The firm’s decision to support and host the chess tournament was not mere corporate philanthropy. Rather, company executives say the firm is seeking the best and most strategic minds in the world to help the company meet its objectives.

Michael Hoffpauir, a consultant for Booz Allen Hamilton who served as TD for the Final Four event, explained the company’s rationale for its corporate support.

“It’s important that we help our clients solve the toughest problems,” Hoffpauir said. “Chess players have demonstrated thatthey are very skilled at solving some very tough problems. There’s a natural linkage there.”

Like most of the competitors in the Final Four event, the Knight Raiders were all foreign students. As such, jobs that involve defense contract work may lie out of reach, but they might be able to secure some of the various jobs that Booz Allen Hamilton has abroad. 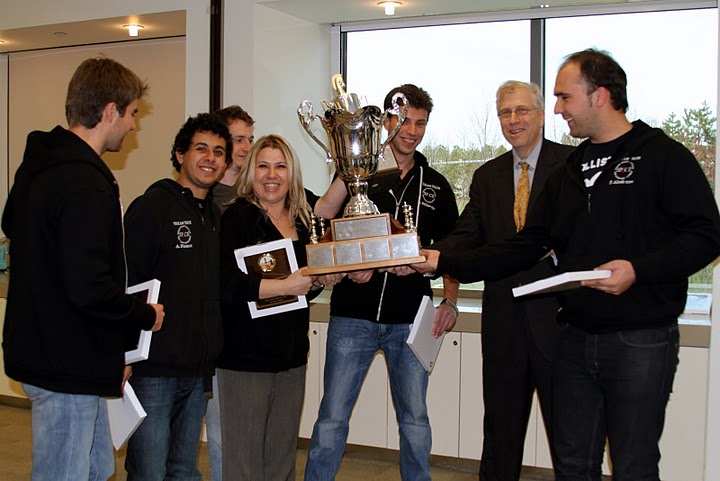 The renowned chess team from the University of Maryland, Baltimore County came in last on Sunday in one of the nation’s premier college tournaments, the first time in a decade that the school did not finish in either first or second place.

Texas Tech University took top place after a series of team round robin games in what is called the President’s Cup, held this year in Tysons Corner, Va. The tournament is regarded as the “Final Four” of college chess. “Our players are depressed,” said Alan T. Sherman, director of the program.

UMBC has dominated the world of college chess for the past decade, giving the relatively small college a place on a prominent stage, winning six of the past 10 Final Four tournaments. This year’s team was led by Sergey “The Stealth” Erenburg, an international grand chess master, along with grand masters Leonid “Chief” Kritz and Giorgi Margvelashvili and international master Sasha “Plaplan” Kaplan.

Sherman, who also is an associate professor of computer science, said Margvelashvili had to be pulled from the games after undergoing emergency surgery on Tuesday. But he said that was only a contributing factor to the poor showing.

UMBC qualified for the tournament by finishing second in the Pan American Intercollegiate Team Chess Championships that concluded in December in Milwaukee. UMBC had won the Pan Am games the year before.

UTB gets the bronze medals

The University of Texas at Brownsville and Texas Southmost College Chess Program finished in third place at the 2011 President’s Cup, the “Final Four of College Chess” that ended Sunday.

“The result is not what we hoped for but the finish is incredibly respectful,” said UTB-TSC Chess Coach Ronen Har-Zvi. “The level has substantially become stronger than last year. It could have gone either way.”

Davorin Kuljasevic, captain of Texas Tech’s chess team and a graduate student in finance, wore an “I (heart) Vegas” T-shirt under his black team hoodie. The T-shirt symbolized the reward the team would get if it won the tournament: a trip to Las Vegas after spring semester ends in May.

“We didn’t expect to win,” said Kuljasevic. “We just wanted to do our best. We only lost one individual game in the tournament.”

“It was supposed to be really tough and it was, it really was,” said Axel Bachmann, a UTB-TSC chess player and junior business major from Ciudad del Este, Paraguay. “We are happy with our effort and how the team spirit was.”

Cornejo said the tournament possibly marked the final time he, Bachmann and chess program members Timur Gareyev and Mauricio Flores will compete together on a team. Gareyev and Cornejo are scheduled to graduate in December with business degrees.

Hilda Silva, UTB-TSC’s vice president for student affairs, traveled to Virginia to be with the chess players. She and chess program director Russell Harwood kept the team well stocked with snacks and sports drinks as they played.

“I’m very proud of everything they accomplished to get to this point,” said Silva. “They looked out and supported each other. They have been competing with these schools at this level for so many years. I follow them because of who they are.”

Brownsville native and UTB-TSC alumnus Sergio Loya, a project manager at Management Analysis Inc. in Vienna, Va., lives in nearby Ashburn, Va. and visited the tournament site to watch the third round. He followed online some of Saturday’s two rounds.

“I think it’s intense first of all,” said Loya. “I think on a level playing fled, UTB-TSC matches up very well with the large name-brand schools in other parts of the country.”

UTB-TSC placed second in the 2010 President’s Cup and finished third in the 2009 tournament that marked the program’s first appearance.

“The real important thing here is what this does is it takes the whole community up the ladder with them,” said UTB-TSC President Juliet V. Garcia. “These chess students tutor coaches and other students in our community. That’s a story that is very powerful.”

With this year’s Final Four in the books, UT Dallas team members took a moment to reflect on a winning season.

“I don’t have any regrets about this season,” GM Ramirez said. “I had a great year, and so did the team. We won a lot of tournaments, including the Texas State College Championship and the Pan-American Intercollegiate Chess Championship. We also won our TelePresence exhibition match last fall against the Chennai Chess Association District team.

“As for the Final Four, in chess you just never know how things will turn out.”

Coach Milovanovic praised the team’s overall season performance and looked ahead to next year.

“I’m very proud of our team’s season,” Milovanovic said. “With this tournament over, our players can return to their studies and focus on individual preparation for the 2011-12 season.”