A draw was enough for him, and the results of the 2nd and the 3rd board, where
GM Kevin Spragget – IM Pablo Lafuente and IM Alberto Andres – FM Daniel Alsina signed draws as well, helped him
maintain the
half-point distance in the final ranking.

Spragget, San Segundo and Andres scored 7
points after drawing their games, and Del Rio and Cifuentes also scored 7
after defeating Lopez and Bellia.

Local player IM Argandoña won his game against
Puerto-Traver and tied the prize for the best Gipuzkoan
player with Alonso despite his loss against FM Recuero.

For his victory GM Ivan Salgado received a check and a typical Basque
“txapela”. 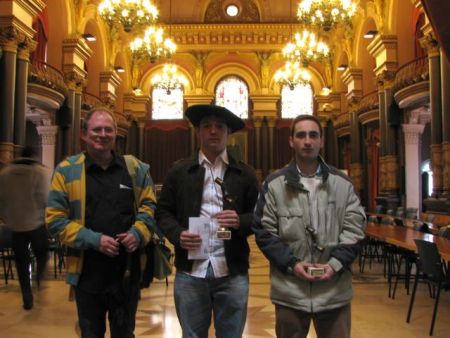 Here they are joined by GM Kevin Spraggett Tension on the top two boards attracts the crowd