a round before the end he is 1,5 points ahead 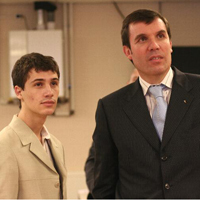 We witness an incredible performance from the young Bulgarian. A round before the end he had secured the title being 1,5 away from the chasing pack.


Ivan won his round 8 game against the youngest GM Parimarjan Negi. Negi went into serious time trouble after move 25 and started playing imprecisely in a position that was already dominated by Cheparinov. On move 32 Negi committed a serious mistake and allowed mate in one, something not seen on grandmaster level since Kramnik’s blunder against Fritz.

Cheparinov’s direct opponent, Tiger Hillarp Persson, was downed by GM Jan Timman. Tiger was also a move away from the mate and resigned, thus levaing the title to Cheparinov. With this victory Jan Timman climber to share second in the table.

GM Emanuel Berg joined the second place group as he finished draw with IM Pontus Carlsson. Jonny Hector did not put up a fight against GM Vassilios Kotronias and the later is just half a point behind the “second shared” group.

IM Emil Hermansson won his first point against GM Erwin l’Ami, but is still bottom of the table.