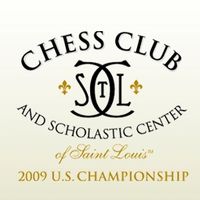 The 2009 US Chess Championship is going on in Saint Louis with the top players in the country participating. Nearly $200,000 in prize money could be available, including a $64,000 check going to any player who achieves a perfect score. That prize honors the late Bobby Fischer, the only player to accomplish that feat. (all details and information here)

The defending champion of the U.S. Chess Championship, along with the top two rated players in the United States all were victorious Friday in the first round of the 2009 championship at the Chess Club and Scholastic Center of Saint Louis.

The 2008 champion, Yury Shulman of Barrington, Ill. , No. 1 rated Gata Kamsky, of Brooklyn, N.Y., and No. 2 ranked Hikaru Nakamura, of White Plains, N.Y., were among the winners in 24-person field. Three of the four youngest players in the tournament — all age 17 — distinguished themselves in the first round. Sam Shankland, 17, of Berkeley, Calif., played to a draw, while Tyler Hughes, 17, of Colorado, and Robert Hess of New York won their matches.

Irina Krush, the 2007 U.S. Women’s Chess Champion, played to a draw against the Gregory Kaidanov, of Lexington, Ky., the No. 9 ranked player in the country. 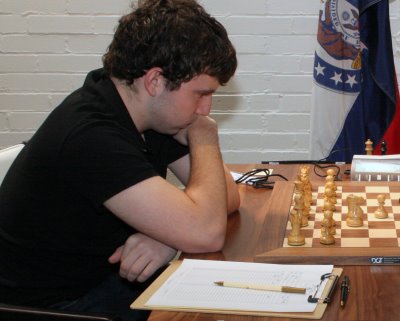 The second day of the U.S. Chess Championship was a repeat of the first, with big upsets and teenagers making the biggest buzz. While it’s hardly a surprise that No. 1 ranked Gata Kamsky of Brooklyn, N.Y., is undefeated after round two, it’s shocking that one of the two other undefeated players in the 24-competitor championship is Robert Hess, a 17-year-old from New York.

Hess came into the tournament ranked 37th in the United States. He has defeated grandmasters in both rounds: sixth-ranked Larry Christiansen, of Cambridge, Mass., on Friday, and seventh-ranked Julio Becerra of Miami, Fla., on Saturday.

Other Round 2 winners included Missourian Michael Brooks. The 91st-ranked Brooks, from Kansas City, beat 15th-ranked Alexander Shabalov, a grandmaster from Glendale, Calif. The youngest player in the tournament, Ray Robson, 14, of Largo, Fla., was victorious over the oldest player, 12th-ranked Boris Gulko, of Fairlawn, N.J., who is ranked 12th.

Defending champion Yury Shulman, of Barrington, Ill., the fourth-ranked player, remained unbeaten. But the second-ranked player in the country, Hikaru Nakamura, lost his chance at an undefeated tournament, when he played to a draw with Jaan Ehlvest, of Baltimore, who is ranked 11th.

An American Idol finalist performs at the US Chess Championship

Aloha Mischeaux, a finalist in the fourth season of the popular American Idol TV show, kicked off the 2009 U.S. Chess Championship in rousing fashion with a stirring rendition of the national anthem at the opening ceremonies for the tournament at the Saint Louis University Museum of Art on Thursday, May 7.

Mischeaux’s performance officially began the opening ceremony, “drawing of the colors” and reception for the national 2009 tournament, which is being hosted by the Chess Club and Scholastic Center of Saint Louis in Mischeaux’ home town of Saint Louis. The Chess Club, which opened in July 2008 in the city’s historic Central West End, is a showpiece, $1 million facility that features numerous TV monitors placed throughout its three stories for closed-circuit coverage of the event.

Mischeaux began performing at age 3 with her church choir as well as local talent shows. She later studied singing, dancing and theater in the University City school district, participating in her school choir and winning several choral competitions, and further honed her talent at the American Musical and Dramatic Academy in New York City.

“Aloha’s magnificent performance is a glorious way to get this exciting tournament started,” said Rex Sinquefield, a retired investment fund manager who is the founder and a member of the Chess Club and Scholastic Center of Saint Louis. “We are delighted to have this prestigious and intensely competitive tournament in our beautiful new facility.”

More about the US Chess Championship 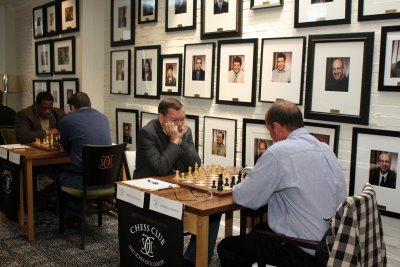 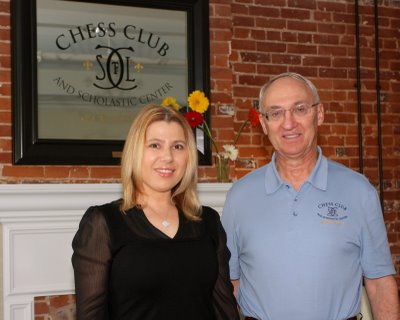 Susan Polgar with Mr. Rex Sinquefield, founder of the Chess Club and Scholastic Center in St. Louis and sponsor / organizer of the 2009 U.S. Championship