In round two of the 2011 U.S. Chess Championship semifinals, defending champion GM Gata Kamsky pressed his initiative and broke through against GM-elect Sam Shankland to become the first player to advance to the finals. GMs Robert Hess and Yury Shulman played another game devoid of wild swings; their second straight draw meant the match will continue tomorrow with a pair of rapid games.

Kamsky’s game was the first to finish. He said his goal going in to the game was to “have some simple position with a little bit of pressure, and I got an ideal position.” His two bishops and open files for his rooks were enough to overcome his crippled queenside pawns, which were never in any danger of being lost. According to Kamsky, “…b5 was just horrible.” He preferred the passive defense Nd8, but all players, including grandmasters in the audience, agreed that Shankland’s problems began by trading queens. Kamsky said he realized Shankland might have some endgame weaknesses, which became evident to him in their first semifinal game. He said it was a big mistake for Shankland not to press for the win more yesterday.

“I’m still very happy with my result,” Shankland said. The 19-year-old decided against playing the Caro-Kann as Black because he said he was “scared” of Kamsky’s record against it. Ironically, Kamsky said after the game that he was expecting Shankland to play the Caro-Kann instead of the Sicilian Defense. Shankland admitted that he did not spend much of his time studying Kamsky’s offbeat 9. h3.

Of all the players who have lost a game during the semifinals, Shankland remained the most upbeat. “Just because I’m not in the running for first place doesn’t mean the tournament is over.” He will go on to play a consolation match against the loser of the Hess-Shulman playoff. “Plus third place sounds cooler than fourth. You can call it a bronze medal.” Shankland said he thinks his day off tomorrow will end up being a useful advantage against whoever his future opponent will be.

The other 19-year-old in the semifinals, GM Robert Hess, got very little out of the opening with White. Like last year’s U.S. Championship, he chose the Tarrasch Variation against Shulman’s French Defense, but this time he managed to hold the draw. Last year Shulman won by playing 3…a6; this year he switched rook pawns and played 3…h6.

On the comical switch of peripheral pawns, Shulman shrugged and said, “Everything is playable in chess, until you know what’s going on.”

“At first I thought I was comfortable but then I played a lot of loose moves,” Hess said. When pressed for where his substandard moves were, Hess replied, “Just about everywhere!” Shulman said he got a slight plus after Hess shuffled his pieces too much. Eventually Hess’ White pieces regrouped back to the center to liquidate the position and nullify any thoughts of Shulman’s a-pawn march.

The U.S. Women’s Championship produced two decisive games yesterday, but today both women who trailed enacted revenge, thus requiring all four players to enter a playoff tomorrow. IM Irina Krush dramatically came back in her match against IM Anna Zatonskih. After playing an abysmal game in round one of the semifinals, she took over both sides of the board and sacrificed a bishop on g6. Zatonskih saw that capturing it meant getting checkmated but leaving it meant going down a lot of material.

After yesterday’s dispiriting loss, Krush seemed elated to get a fresh start today. “When I sat down to play, I suddenly got a good feeling of energy, that I was really going to enjoy playing,” Krush said. “I had that feeling until I played h3. When you make a move like that, you feel like you’re playing like you did yesterday.” She said that the game turned when Zatonskih’s 13…e5, which seemed natural, created a more dynamic game. Krush said she appreciated the sharpness of the positions that followed. After 14. dxe5, Bxc5 falls victim to 15. Qc2, with dual ideas on the c-file and the light squares. 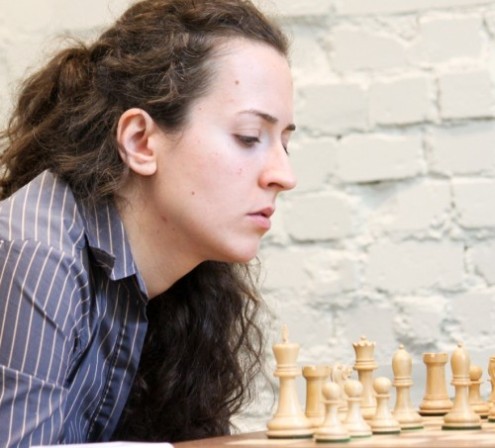 “I was very grateful to get this position and have something to play for,” Krush said. “I’m happy to have earned myself a chance to keep playing.” Asked about her momentum for tomorrow’s twin G/25 matches, Krush said, “Whether I’m the favorite or not, no one cares how you evaluate your chances. You have to show it on the board.”

WFM Tatev Abrahamyan was in an even direr situation than Krush. Not only did she have to win today, she also had Black against one of the most solid players in either field, WGM Camilla Baginskaite. Playing the longest game of the day, Abrahamyan worked around her opponent’s thorny c-pawn, and then got her own h-pawn deep into enemy territory. After transferring to a rook-and-pawn endgame, her active king and menacing rook pawn were enough to tie down her opponent’s pieces. With zugzwang looming, Baginskaite allowed an invasion, but at the cost of nearly all her remaining pawns. She soon resigned.

Abrahamyan said she also faced a must-win situation at the 2005 U.S. Championship. She played IM Rusudan Goletiani in a two-game match for the title, where she also lost the first game as White. “I learned a lot of patience from that match,” Abrahamyan said.

Tomorrow’s playoff will be two G/25 games with a five-second increment from move one. If still tied, there will be a G/45 Armageddon game with Black having draw odds. A silent bidding process will determine colors – the player bidding the lower amount of time gets that amount of time plus color choice, while the other player gets the full 45 minutes.