Azmaiparashvili and Wesley So close behind 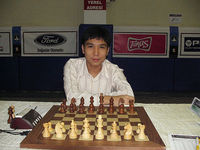 The tournament is the sixth and last elimination round under the Grand Prix system in the Asian-Pacific region. The event will pick the most talented chess players in the region to compete in world tournaments. The 1st Dragon Chess tournament, which will give out a total of US$20,000, is scheduled to take place from tomorrow to next Tuesday with nine matches, and attracting many players from the Philippines, Singapore, Myanmar, Georgia, Australia, India and Vietnam.

Expect full report on Chessdom.com right after the end of the competition. The official site is

More about Chess in Vietnam

The organisers of the World Youth Championship 2008 and the ASEAN Chess Academy together with the Vietnam Chess Federation, is pleased to announce a Seminar for Coaches leading to FIDE Trainer / FIDE Instructor qualifications.

The seminar will be held from 20 to 30 October, and only be conducted during playing seesions (and on off days) to accommodate the many requests from national youth trainers wishing to attend but with coaching obligations while in Vung Tau, Vietnam.

You can download the official prospect and registration form at FIDE.com or contact the Course Coordinator Peter Long at peter@aseanchess.