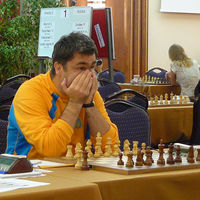 One of the strongest World Blitz Championships ever took place 21-22 November in Moscow. It included the ten participants from the Tal Memorial, the six who qualified from the preliminary round, and the World Champion Vishy Anand. Each player participated in a total of 40 games. The championship could not have a more exciting ending, as both Anand and Ivanchuk headed in the last round with equal points. During the whole tournament the two have been chasing each other and the decisive battle was left for the last two games. The first game Anand had black and held Ivanchunk for a draw. However in the second game Ivanchuk stunned Anand with black and grabbed the title.

Round by round results can be found on the official site

Ivanchuk heading for the World Cup 2007

After defeating opposition in Moscow, Ivanchuk will be heading for Khanty Mansiysk where he will participate in the World Chess Cup 2007. He will play against Pedro Aderito in the first round, a game that should not be a problem for Ivanchuk. However, the competition is long. Each mini match will be 2 days long and the final will be 4 days.
You will be able to follow live comments from the games at Chessdom. Do not forget to vote what game from the World Cup you want to see commented live.