In a very exciting quarterfinal round Yifan Hou, Humpy Koneru, Alexandra Kosteniuk, and Pia Cramling emerged as the four semifinalists of the World Women Chess Championship.

Just like in the previous round, Alexandra Kosteniuk once again played a brilliant game with Black pieces. Today she blasted the ultra-solid Anna Ushenina off the board in a sharp variation of the Nimzo-Indian defence. Kosteniuk initiated a sequence of pawns sacrifices to ruin White’s structure and clear the e-file for very important 18…Re8 check. With all Black pieces being active on the open files, Ushenina’s King quickly found itself under the crossfire and Kosteniuk ruthlessly executed the final attack to qualify to the Women World Chess Championship semifinals.

Humpy Koneru stated that she has been dreaming to become champion since her early childhood and now she has a chance to attack a clear first place. Her convincing 2-0 win against one of the surprises of the tournament, Shen Yang, leaves no question about the Indian GM intentions.

Yifan Hou is the player with most victories until now in the competition. She outplayed Mkrtchian who made a few mistakes and resigned with only 1 minute left at move 28.

The competition will convert in an East vs. West battle as the last player qualified was Pia Cramling. Cramling won her first game convincingly, but in the second she was having serious positional problems. However, her opponent Stefanova missed a few clear chances for victory and Cramling achieved a draw and advanced to the next round.

There was a random draw on Sunday on who will be invited to the anti-doping control. Humpy Koneru and Hou Yifan were chosen. The reslts will be official later on in the competition. Similar doping controls will be applied at the World Mind Sports games in Beijing. 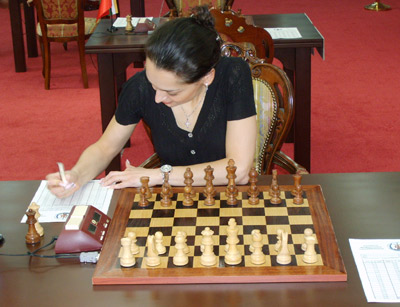 Alexandra Kosteniuk advanced to the semifinals 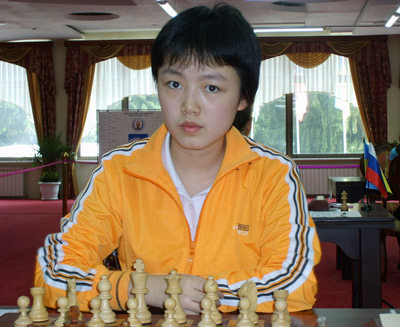 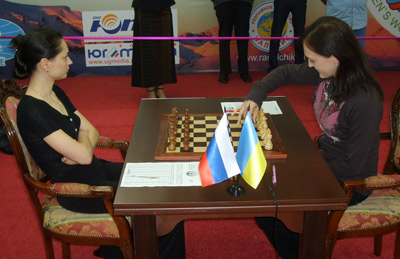 Lilit Mkrtchian with very good performance at the WWCC

An Indian chess player Humpy Koneru has the highest rank at the Women’s World Chess Championship which got under way in Nalchik. She played a magnificent game in the first round of the tournament and qualified to the third one having missed the second round because her opponent from Georgia had not shown up. We talked to her on one of her free days.

- Humpy, is it difficult to hold leadership in women’s chess?

- It is a rather difficult task because any player who aims at reaching high level will emulate me. Besides, the level of chess playing has enormously increased. Computer chess training programs have been created. All in all I’d say that the rating of the player doesn’t mean much. The main thing any player should concentrate on is the way he or she plays himself.

- It is not the first time that you came to play at the tournament as a leader. Yet you have never been a Champion.

- Actually it is my third World Championship. I managed to advance to the semifinal at the first one. I won in the tournament in Ekaterinburg. I also won four Junior World titles and managed to win several open men’s tournaments and Asian Championships. Of course, my most cherished dream has always been to become a Women’s World Champion.

- One of the Grand Prix tournaments is planned to be held in Nalchik next year. Are you going to come here again?

- Truly speaking I don’t know the details but I would like to participate.

- How did you begin playing chess?

- My father taught me to play chess when I was a little girl and he is still my coach. My younger sister also used to play but she has given up now. My father always accompanies me to different tournaments.

- We know about the life of women in India only from Indian films. How do men take the fact that women in your country play chess.

- Traditions are being changed in India. Women didn’t work and used to be illiterate. Now the situation has fundamentally changed. Women are equally represented in education, science and other domains, actively go in for different sports.

- How much time a day do you devote to chess?

- Will it last forever?

- I can’t say for sure. I will play until I get pleasure from it.

- What if your future husband objects to your playing chess?

- I think it should be agreed on before the marriage. (Laughs)

- How and with whom do you usually spend you free time?

- I prefer to spend my free time with my family. We go to restaurants and visit theatres. I also like to play badminton.

- Do chess players have their own superstitions?

- I don’t really believe in them. I get concentrated before the game, become estranged and shrink into my own shell.

- Thank you for an interesting talk. Good luck.